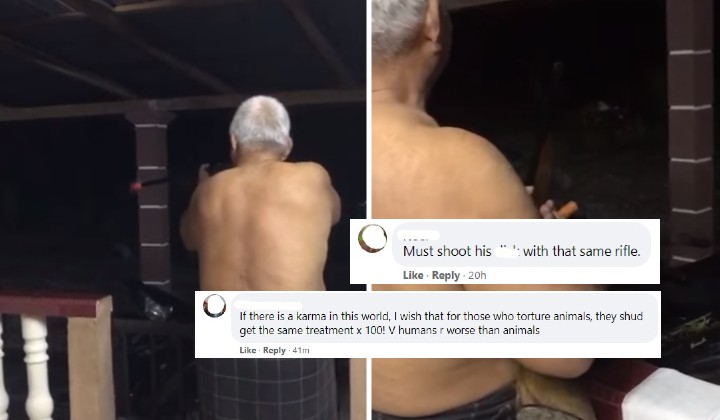 A video of a middle-aged man shooting at a stray dog with a hunting rifle made its round around social media, allegedly filmed in Malaysia.

In the video, the man shot at a dog that was in the vicinity of his house, causing the dog to continuously yelp in pain. In the background, a woman’s voice can be heard saying that he “only got the leg”.

The video sparked outrage over the flippant manner of hurting an animal.

What does the law say?

Some people questioned why the man even had a rifle to begin with, since Malaysia is well-known for our strict gun laws.

It is likely that the man seen owns and lives in a large parcel of land. Being a landowner or farmer and needing firearms to protect yourself from pest or aggressive wildlife is actually an acceptable reason to apply for a gun license, on the assumption that his firearm is legally acquired.

Yet, the act of shooting at animals is clearly illegal. According to the Animal Welfare Act 2015, no person shall kill by way of shooting with firearms any animal unless it is authorized by the veterinary authority during emergency or for the purposes of disease control.

Sadly, information is currently lacking as to the details of the man as well as the time and location of the shooting.

Those with any additional information are encouraged to reach out to the Malaysian Animal Welfare Association or the Malaysia Animal Association, who is offering a RM2,000 reward for details of the culprit.