Allianz Malaysia says their internal investigations found that the allegation was uncorroborated. 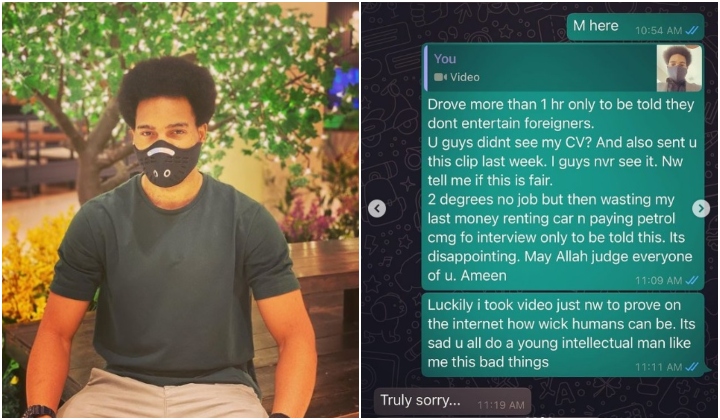 Benice Nkpokiti, a Nigerian national living in Malaysia, has taken to social media to document an alleged act of racism during a job interview at Allianz Malaysia.

On social media, Benice shared a video of the interview process where a woman is heard saying that the company isn’t allowed to hire foreigners, despite inviting him over after viewing his CV and him sharing his picture prior to the interview.

I was booked for an interview after posting my resume/CV online and was contacted by Allianz Malaysia on WhatsApp and sent a clip to them clearly showing who I am as well. Then after this day I rented a car, went for more than 1hr 30mins drive without breakfast as due to excitement being called for an interview for the first time after 6 years.

But things took a bad turn when he showed up at the office.

Benice writes that he was rudely asked by an employee, “what are you doing here?” and allegedly told him that they don’t hire foreigners and barely hired Indians. These statements were not recorded on video, however.

I had to quickly get my phone out to start recording as proof so that people won’t think it’s just a story and she noticed it and tried to be polite but still saying what she said. I was like how can she say such things with such confidence.

Though he sounded understanding of the rejection on the video, Benice expressed his disappointment on Instagram.

You see, the mixed martial arts (MMA) fighter is a registered nurse with a double degree in nursing and business administration and was dejected by the treatment despite sharing his status as a foreigner beforehand.

Many companies in Malaysia have internal policies that restrict the hiring of foreign nationals, but the incident caused quite a stir online with Malaysians calling out Allianz Malaysia for the alleged disrespect.

In a statement, Allianz Malaysia insists that the company practices inclusive hiring and fair employment for all while embracing inclusivity and diversity.

The statement also notes that the company is “equally distressed” that such an incident has transpired and that the allegations on racism and unethical behaviour is “deeply disappointing.”

While we understand Mr. Nkpokiti’s anger and disappointment, we are equally distressed that such an incident has transpired and any allegations that Allianz Malaysia would even resort to such unethical tactics or racism is deeply disappointing.

Allianz Malaysia also states that they have gotten in touch with Benice Nkpokiti to apologise and explain their hiring practises.

An internal investigation concluded that the allegations are uncorroborated.

Following our investigation, we acknowledge that due diligence was not exercised by our agency when shortlisting Mr. Nkpokiti for the position of an insurance agent. The incident is deeply regrettable and we assure the public that appropriate actions are being taken to address shortcomings on our part in this matter.