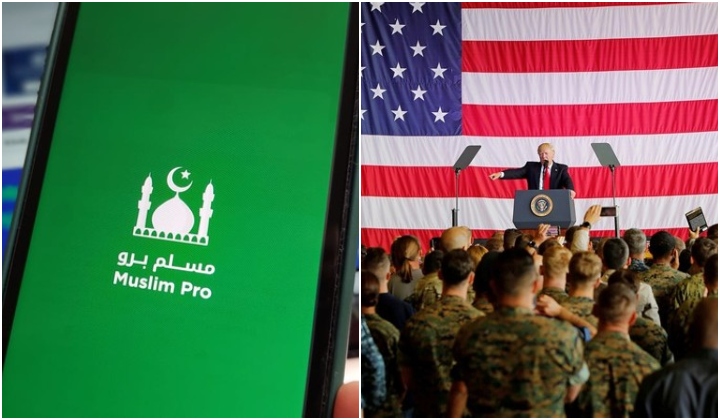 UPDATE: In an official response, Muslim Pro announced that it is cutting ties with all third-party data brokers, including X-Mode, the company identified as the one selling user information to defense contractors such as the United States military. Full story HERE.

Some Malaysians were shocked to find out today, that an app on their mobile phones may have been selling their location data to the United States military.

According to Motherboard by the media company VICE, the U.S military has been buying data of people across the globe, harvested by innocent-looking apps downloaded on their mobile phones.

Others apps include a Muslim dating app called Muslim Mingle, a step counter app called Accupedo, popular Craigslist app CPlus for Craigslist, Global Storms which is an app for following hurricanes and typhoons, and a bubble level app that can be used to install shelves in a bedroom.

This encouraged the app’s developers, Singapore-based Bitsmedia, to incorporate a local Malaysian entity and set up its first-ever dedicated team to grow its presence in Malaysia, called Muslim Pro Malaysia.

TRP has since reached out to Muslim Pro Malaysia’s country manager Nik Emir Din for comment and we’ve yet to receive a response.

You’ve likely seen these pop-ups when installing a new app, where the app informs you this would be needed for the app to work properly.

According to Motherboard, how it works is user information is sold to third-party data brokers. These brokers then take the data and sell it to contractors, who then sell it to buyers…who apparently includes the U.S military.

Although this practice has been criticised for privacy concerns in the past, location data firms insist that the information is anonymised and the identity of users are preserved. However, Business Insider reports that some studies show that de-anonymising the data to tie it back to individuals is easy.

However, Business Insider reports that some studies show that de-anonymising the data to tie it back to individuals is easy.

The apps mentioned above, including Muslim Pro, sell location data to a third-party broker called X-Mode.

According to X-Mode’s website, they have sold location data to defense contractors who in turn, according to Motherboard, provides the data to the US Department of Defense.

X-Mode admitted to Motherboard that they do business with “technology companies that may work with government military services”, adding that their work with such contractors is focused on counter-terrorism, cybersecurity, and predicting future Covid-19 hotspots.

X-Mode licenses its data panel to a small number of technology companies that may work with government military services, but our work with such contractors is international and primarily focused on three use cases: counter-terrorism, cybersecurity and predicting future COVID-19 hotspots.

The U.S military is actively buying access to sensitive information

As highlighted by Business Insider, this news uncovers how concealed the location data industry is, and the fact that the U.S military is actively buying access to sensitive information.

What’s even more shocking is that many of the apps involved in the data supply chain are Muslim-based apps, and the U.S has waged war on Muslim groups in the Middle East for decades, killing hundreds of thousands of civilians during military operations there.