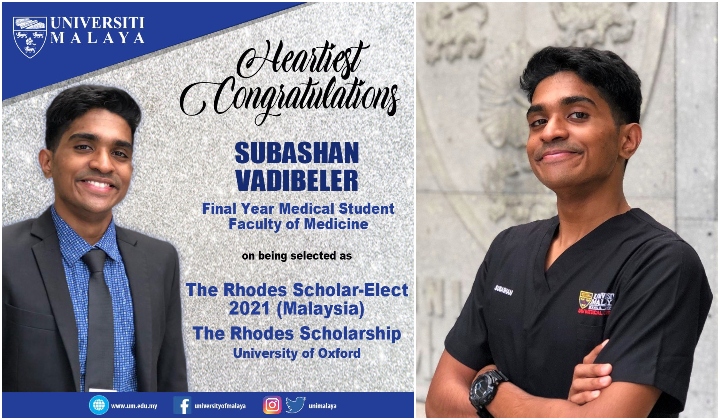 Another Malaysian student has made the country proud of their amazing achievements!

Subashan Vadibeler, a 24-year-old final year medical student at Universiti Malaya (UM) has just been awarded the prestigious Rhodes Scholarship to study at the University of Oxford in the UK!

Subashan, who hails from Ipoh, will be heading to Oxford University in the UK in October 2021 to pursue not one, but two master’s degrees.

The Rhodes Scholarship on the key qualities of a Rhodes scholar

Speaking to Malay Mail, Subashan shared that the experience has been “unreal”, adding that he called his mother and sister after he received the great news on Monday, 9 November.

He said the Rhodes representatives asked him a mix of personal questions and questions about his career during his interview, adding that he knew he was up against eight other candidates.

The interview went okay, I had a hunch that maybe I had a chance but there were also eight other finalists. I managed to talk to them and they seemed pretty great but it was quite a surprise.

Subashan hopes to one day eradicate dengue, a dream inspired by his experience in medical school at UM, where he saw many patients who were suffering from the mosquito-borne disease.

Subashan humbly acknowledged that this amazing opportunity could not have been possible without the support and guidance from the UM medical faculty.

Preschool Teacher Says Constantly Crying 5YO Boy Is Not School-Ready, Gets Criticised By Netizens

[Watch] Johor Students Celebrated End Of SPM With A Motorcycle Convoy, Get Tailed By Police