The doll is part of Barbie’s Dream Gap project which aims to inspire young girls worldwide. 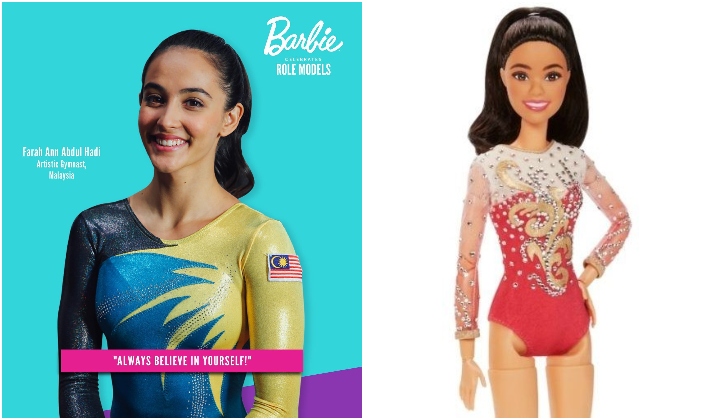 The doll is part of Barbie’s Dream Gap project which aims to inspire young girls worldwide and Farah is just one of the international athletes named as role models.

Barbie is committed to shining a light on empowering role models past and present in an effort to inspire more girls. As a key part of our ongoing global initiative, the Dream Gap Project, we’re introducing girls to women’s stories from all walks of life to show them they can be anything.

A short biography on the 26-year-old SEA Games gold medalist is featured as part of her recognition on Barbie’s website. It writes how Farah began her gymnastics career at the age of three and was already representing her home state of Selangor by the time she was seven.

Farah joined the national team at 8 years old and had her first International appearance at the 2010 Commonwealth Games in New Delhi, where Farah and her team won fourth place.

She also became the first Malaysian gymnast to win a silver world cup medal at the International Federation of Gymnastics (FIG) World Challenge Cup held in Slovenia in 2016.

Farah Ann is a true believer in the power of sports and aspires to utilize sports as a medium to inspire the younger generation.

Farah acknowledged the tribute in a press statement, saying how honoured she was to be recognised as a Barbie sports role model for young girls.

I believe that all of us are capable of achieving our dreams and goals no matter what it may be. You just need to remember that self-belief is your greatest weapon in achieving anything.

Though, at the time of writing, it is unclear if a Barbie doll has been made in Nicol’s likeness too.

Farah, Nicol, as well as Olympic diver Leong Mun Yee, bowler Shahlin Zulkifli, and speed skater Anja Chong were also celebrated by Barbie in March in conjunction with International Women’s Day as part of their “You Can Be Anything” campaign.

Imagining she can be anything is just the beginning. Actually seeing she can, makes all the difference. In conjunction with International Women’s Day, Barbie celebrates 5 female athletes who have brought Malaysia pride through their athletic achievements to spur inspiration in the next generation of young athletes!

Farah is set to compete in the Tokyo Olympics next year and is the third Malaysian artistic gymnast to qualify for the multi-sport competition.