Two people perished in the crash. 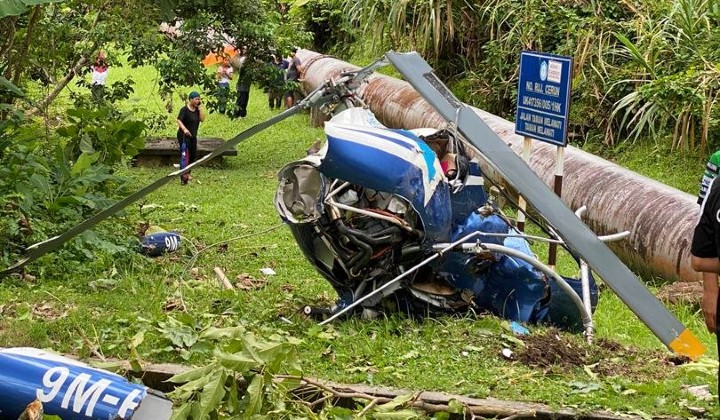 Two helicopters believed to be privately owned reportedly collided in the air near Taman Melawati between 11.20am and 11.45am this morning.

Ampang Jaya district police chief ACP Mohamad Farouk Eshak has confirmed that the in-air collision caused one of the helicopters to crash, while the other managed to successfully manoeuvre an emergency landing at the Sekolah Kebangsaan Tamil Taman Melawati field nearby.

The two helicopters were from the same company and were believed to be flying between Subang and Genting Sempah.

According to The Star, it is believed that both helicopters left Subang Airport at 11.11am, and one of the two crash-landed 22 minutes later at 11.33am. The collision between the two helicopters occurred at an altitude of 1,300ft (396m).

The two helicopters were each carrying two occupants comprising of three men and a woman.

Unfortunately, two of the four people did not survive the crash. Mohamad Farouk confirmed the identities of the two victims as My Heli Club’s captain and chief flying instructor Commander (Rtd) Mohamad Sabri Baharom, 56, and Mohd Irfan Fikri Mohamed Rawi, 44.

According to NST, the occupants of the crashed helicopter sustained visible injuries and were still strapped in their seats in the wreckage as nearby residents came to their aid.

Police investigations are focusing on the cause of death. The probe into the cause of the incident will be carried out by the Civil Aviation Department.

Transport Minister Datuk Seri Dr. Wee Ka Siong said an investigation has been initiated by the Air Accident Investigation Bureau (AAIB) to determine the circumstances and cause of the accident, and those initial findings will be published within 30 days.