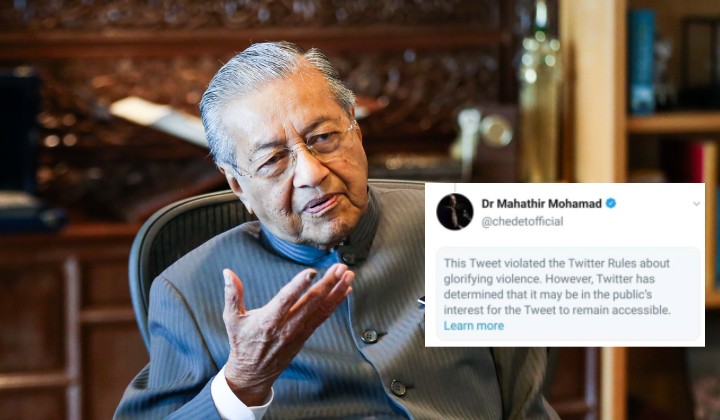 Tun Dr Mahathir Mohamad’s controversial Tweet on Thursday that states “Muslims have a right to kill French people” has been removed by Twitter after initially flagging it for glorifying violence.

The full Tweet that says “Muslims have a right to be angry and kill millions of French people for the massacres of the past” was part of a series of Tweets with his thoughts and comments about the recent beheading of a French teacher who had shown pupils cartoons of the Prophet Muhammad.

“But irrespective of the religion professed, angry people kill,” said the former Malaysian prime minister. However, he continued to say that Muslims by and large have not applied the “eye for an eye law” and that the French shouldn’t also.

But by and large the Muslims have not applied the “eye for an eye” law. Muslims don’t. The French shouldn’t. Instead the French should teach their people to respect other people’s feelings.

Cedric O, the French junior minister for Digital Affairs, also called for the suspension of Dr Mahathir’s account. “If not, @twitter would be an accomplice to a formal call for murder,” he Tweeted.

I just spoke with the MD of @TwitterFrance. The account of @chedetofficial must be immediately suspended. If not, @twitter would be an accomplice to a formal call for murder.

Dr Mahathir’s controversial tweets come just as news broke of a second beheading attack in a church in France, where a 70-year-old was decapitated and two others killed. French President Emmanuel Macron called it an “Islamist terrorist attack”.

1. A teacher in France had his throat slit by an 18-year-old Chechen boy. The killer was angered by the teacher showing a caricature of Prophet Muhammad. The teacher intended to demonstrate freedom of expression.