A timeline of Malaysia’s most unfortunate child murder case. 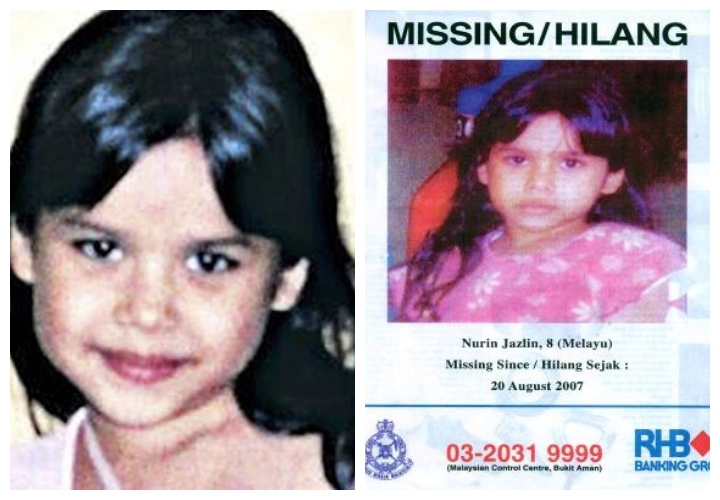 It started as an evening like any other for the humble residents of a quiet flat in Section 1, Wangsa Maju. However, things quickly turned inside out for the community upon the discovery that a child had gone missing after leaving home to visit a night – market just a stone’s throw away.

On the 20th of August 2007, 8 – year – old Nurin Jazlin Jazimin, the second child out of three siblings, with beautiful “jet-black hair and eyes to match”, set out for the night market near her house in hopes of buying her favourite hair clip.

What was meant to be a short trip for the little cherub quickly escalated into a national  nightmare when she failed to come back home that night.

After searching high and low for their missing child,  Jazimin Abdul Jalil and Norazian Bistaman then headed onto the nearest police station where they eventually filed for a missing person’s report.

Thus began the nationwide search for the missing child, led by authorities, a number of organisations including NGOs and the mainstream media.

During the investigation, authorities were able to gain access to CCTV footage that allowed them to look for more clues in Nurin’s disappearance. One footage in particular showed the young child being forcefully dragged into a white van on the night she vanished, this concluded that Nurin wasn’t just missing, she had been abducted.

On the morning of the 17th of September, almost a month after Nurin’s abduction, Cheng Yan Feng, the supervisor of a book distributing company in Petaling Jaya, around 16km from where Nurin went missing, found a black and blue sports bag outside their company’s premises. At first, she assumed the bag belonged to the general manager, and left it for him to find.

About 30 minutes later, Jack Yeoh Huat Lip, the general manager of the company arrived at work. Upon finding the bag, he insisted that it did not belong to him.

Nothing could have prepared Jack for what he was about to witness as he opened the bag to find a pair of human legs. The police were immediately called, upon inspection, the body was identified to be a young girl, between the ages of six to nine.

A post – mortem revealed that the girl had bruises covering her neck area, an indication that she might have been strangled. Reports also showed signs of bruises on her hands. Worst of all, the coroner had also found a cucumber and brinjal inside the victim’s genitals.

Petaling Jaya police chief Assistant Commissioner Datuk Arjunaidi Mohd ultimately confirmed that the victim had been dead for more than six hours before her body was discovered.

She must have suffered so much pain before she died.

Nurin’s parents, who heard the news of the girl’s body being found, rushed to Hospital Kuala Lumpur to identify her. Upon seeing the body, they denied that it was their daughter. The victim’s face and body was so severely deformed that they could not recognise her.

It was also speculated that the child might have been a foreigner due to the absence of the mandatory injection mark given to all local children to prevent tuberculosis. Unfortunately, DNA test results confirmed that the girl was indeed the child of Jazimin and Norazian.

Nurin’s violent torture and death sparked an uproar that swept throughout the entire nation. There was an immediate full – scale hunt to find who was responsible for the child’s murder.

In an attempt to find justice for Nurin, some even wanted to charge her parents for negligence, saying it was their own carelessness that resulted  in the victim’s abduction and murder. Child neglect is a punishable offence according to the Child Protection Act 2001, but the idea was shunned by citizens and ministers alike.

The Malaysian Crime Prevention Foundation vice – chairman at the time, Tan Sri Lee Lam Thye, stated how it would be unfair to charge Nurin’s parents over their own daughter’s abduction and death, adding that “they have gone through enough and there is no need to further punish them”.

Lee also went on to mention how the main issue was not about punishing the parents but how the police and the public could come together to nab those responsible for committing such horrible crimes.

This is a very heinous crime and every effort should be made to solve the case.

Eventually on the 28th of September 2007, five people – four men and one woman – were arrested in connection with Nurin’s case. All five of the suspects were between the ages of 27 and 35. The woman was the first among the five to be released after interrogation while the men were remanded for seven more days under police custody.

Later, they too were released due to a lack of evidence to tie them to the crime.

With no more leads to go on, police offered a reward of up to RM 10, 000 to anyone who could come forward with information that might lead them to Nurin’s perpetrators. Another RM 10, 000 was added to the reward pool by a private businessman, who, to this day, still remains anonymous.

On the 11th of October 2007, the police released an enhanced CCTV footage of a man carrying a Diadora gym bag (the bag which contained the remains of Nurin Jazlin). The footage also showed a woman in a red dress and three other men lurking around the same location where the bag was dropped off.

This footage was enhanced with the help of the United States Federal Bureau of Investigation (FBI) forensics lab in Washington. Despite the enhanced clips, it failed to reveal the face of the motorcyclist or the license plate of the motorcycle that was used to transport the bag which contained the victim’s body.

Three months after Nurin’s death, her uncle Jasni Abdul Jalil and several others drafted a proposal in December of 2007 to create an alert system known as the Nationwide Urgent Response Information Network (Nurin) Alert.

The plan was submitted on the 14th of January 2008 to the Ministry of Women, Family and Community Development.

This idea was based on the United State’s Missing: Broadcasting Emergency Response also known as the AMBER alert, a warning system specifically designed to immediately trace missing children through a comprehensive network that involved authorities and the community. The system was created after the kidnap and murder of nine-year-old Amber Hagerman in Texas of 1996.

This was one of the first steps towards the creation of Talian Nur, the hotline later set up by the Ministry of Women, Family, and Community Development (KPWKM) to enable early intervention for missing children.

As of 2018, Nurin’s father has urged police officials to reopen Nurin’s murder case in hopes of finding something new with the use of modern technology, his plea was never granted and the case to this day still remains unsolved.

It has now been 13 years since the loss of Nurin Jazlin. Yet, the tragic details of her disappearance, torture and death serve as a grisly reminder for parents and guardians to always supervise their children regardless of their wheareabouts.

Regardless, the citizens of Malaysia hope and pray that one day, Nurin’s family members will be able to find their healing from such a traumatic experience.

As for Nurin Jazlin Jazimin, may her young soul rest in peace.

If you have any information regarding this case, reach out to Talian Nur at: