At this rate, the chicken rice seller says that he might be forced to close shop every time there’s a CMCO. 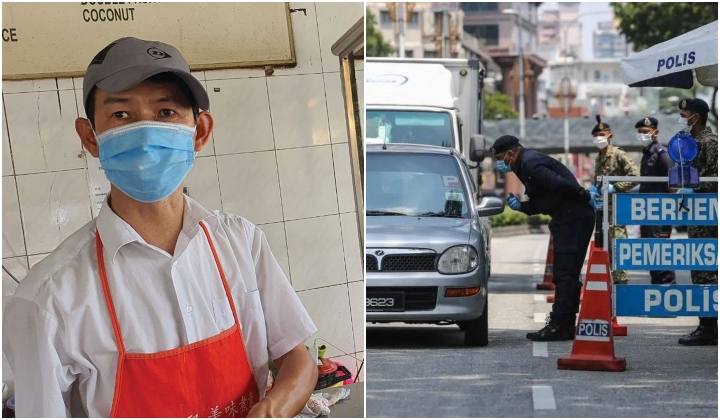 A chicken rice seller and his three family members on the way to open their shop were hit with compounds for breaking the 2-persons car rule but things got doubly worse as on the way back, they were slapped with another compound bringing the total to RM3,000.

However, the difficulty of his situation has spurred an outpouring of support and outrage online after SJ Echo highlighted the hawker’s plight yesterday, explaining that the Chuan Kee chicken rice stall operator was slapped with three RM1,000 compounds for travelling from home to work and back.

The stall operator, Seow Boon Keong, along with his two sisters and nephew work together at the stall in USJ4, travelling from Jenjarom about 30 kilometres away.

He told SJ Echo that they were caught in a nearly impossible situation as three of the family members cannot drive, and a taxi ride would cost RM80 to and back.

He may be forced to close shop

The chicken rice seller revealed that he might have to close shop everytime a Conditional Movement Control Order (CMCO) was imposed as the 2-person in a car rule would result in him losing his only source of income as he only has one vehicle to travel to work.

Because of the distance and also because the other three cannot drive, we travel in the same car. The two-person in vehicle rule is not fair for people like us who run a business. We have even produced letters confirming that we work and run the business in USJ4. How are we expected to earn a living during these hard times?

The hawker’s plight has since gained much traction online as Malaysians were upset at how some CMCO rules were disproportionately affecting those struggling to make a living, especially during these tough times.

Why I said this government is completely out of touch with reality. pic.twitter.com/jmTr4RA7tW

I cried reading this! Thank god got response from the MP! Thinking over other innocents that got summons but their stories didnot got heard teared me 😢

Discretions are given to the police to either issue or not the compounds. Somehow, this policeman decided to issue anyways which is not wrong by law but is seen as not compassionate & heartless. They are travelling to/fro work. Not to the malls. More discretion shld be exercised.

However, there is some hope as Seow’s story has reached the ADUN of Subang Jaya Michelle Ng and Subang Member of Parliament Wong Chen.

Wong Chen has pointed out that the hawker has ground for appeal for the police to drop the compounds and just issue a warning.

Michelle Ng and ADUN of Banting Lau Weng San have also reached out to the family and verified letters they prepared to travel between Jenjarom and USJ4.

SJ Echo also reported that the matter has been escalated to National Security Council (MKN) Selangor to review the limit on the number of people travelling in a car.