“I have failed,” cried the North Korean leader. 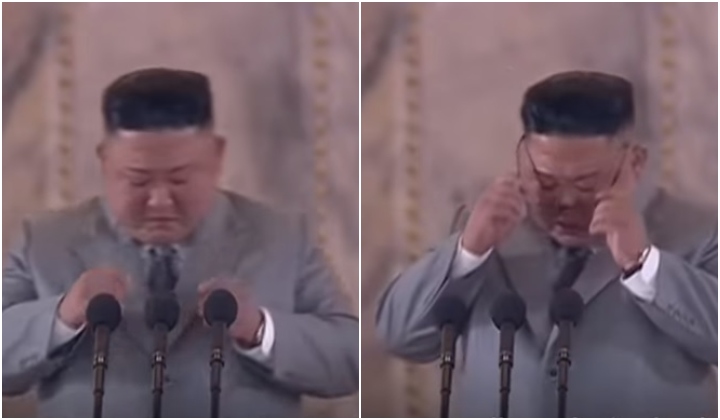 In a rare display, North Korean leader Kim Jong Un took off his glasses and wiped away tears as he apologised to the nation during his speech at a massive military parade.

Our people have placed trust, as high as the sky and as deep as the sea, in me, but I have failed to always live up to it satisfactorily. I am really sorry for that.

This time, the North Korean leader dedicated a huge part of his speech to sympathize with the people, while expressing his gratitude and apologising for not being able to improve citizens’ lives despite their absolute support.

Although I am entrusted with the important responsibility to lead this country upholding the cause of the great Comrades Kim Il-sung and Kim Jong-il thanks to the trust of all the people, my efforts and sincerity have not been sufficient enough to rid our people of the difficulties in their lives.

He also told the crowd that he was grateful “not a single person” in the country had contracted Covid-19 as the state media had repeatedly denied having any infection within their borders.

The rapt crowd in Pyongyang was seen to be moved to tears by their leader’s speech as well.

The Korea Times reported experts noting that the speech was aimed at engineering public support as the North Korean leader struggles to lead the country out of an unprecedented national crisis from the “three hardships” as mentioned in the speech ― international sanctions, the COVID-19 pandemic and natural disasters.

Hong Min, director of the North Korea division at the Korean Institute for National Unification, notes that the address was peppered with alarming words such as “grave challenges”, “countless ordeals” and “unprecedented disasters” – which indicates he is feeling a lot of pressure on his leadership.

At the end of the speech, he calls on the people to extend their full support and trust in him. From this we can see at that he feels bad about the struggles of the people, but he also feels a lot of burden and stress from the situation and is highly concerned about the stability of his regime.

Hong Min, director of the North Korea division at the Korean Institute for National Unification to The Korea Times.

However, the military might did come in later as an unexpected new intercontinental ballistic missile was unveiled – at which Kim Jong Un broke out into a huge smile.

[Watch] After 4 Months Of Not Seeing Each Other, Student Cried In Her Father’s Arms And Wants To Come Home

North Korea Banned Its People From Laughing, Drinking And Shopping: Here’s Why