This is the first stegodon fossil ever discovered in Malaysia. 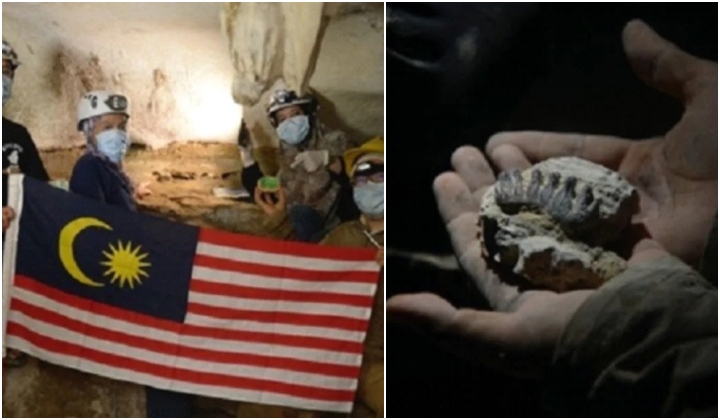 A fossil of an ancient elephant, aged between 30,000 to 80,000 years old, has been discovered in a limestone cave in Gopeng, Perak.

The extinct stegodon fossil was discovered by University of Malaya (UM) researchers, lead by Dr Ros Fatihah Muhammad from the Geology Department and paleontologist and zooarcheologist Lim Tze Tshen from the Paleontological Society of Malaysia.

Imaging of the teeth fossil by UM’s Dental Faculty indicate that the ancient elephant died just under the age of two.

Dr Ros told Berita Harian that the discovery was especially important as a stegodon fossil has never been discovered in Malaysia before.

Though the fossil is not connected to ancient humans, she explains that it’s particularly significant from a biogeographical standpoint. The discovery has implications on the migration routes of ancient flora and fauna, including humans, as well as environmental changes in the Southeast Asian region.

This species is also quite different from the modern Asian elephant species (Elephas maximus) that currently roams the country.

Lim told The Star that this discovery points to the existence of various extinct animal species in Peninsular Malaysia.

There is evidence from this stegodon’s discovery site and other paleontological sites that show the existence of extinct animal remains in Peninsular Malaysia such as orangutans, Sumatran rhinos, Java rhinos, Asian black bears and a rat known to be extinct from the planet.

Lim Tze Tshen, Paleontological Society of Malaysia to The Star.

However, they warned of the threat of quarrying at Kinta Valley’s limestone hills which could jeopardise future discoveries.

With this significant discovery, the researchers hope that the Perak state government will gazette the area a new geopark, Geopark Lembah Kinta, to protect it from encroachment and destruction.

Public awareness of the importance of preserving limestone hills from the quarry threat for example, the discovery of fossils from this kars cave is a strong reason for continued conservation.