The Health DG and several other high-ranking government officials are undergoing Covid-19 quarantine. 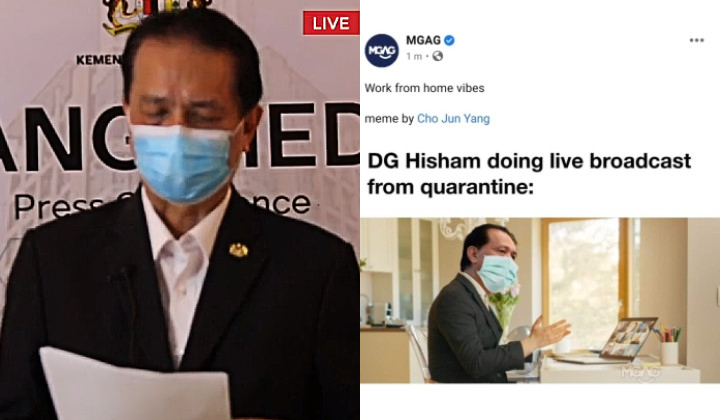 Police are investigating the admins behind the MGAG’s Facebook page for having allegedly insulted the DG with an altered image of him not wearing pants.

MGAG had supposedly posted up an edited picture of Dr Noor Hisham, making him appear to be sitting indoors behind a desk and working in front of a laptop dressed in a suit and tie, but was half-naked from the waist down, with only a pair of boxers and socks covering him up.

Notably, the DG will be making live Covid-19 press conferences streamed directly from his residence, as he undergoes self-isolation from close contact exposure with an infected patient.

The posting was later taken down following backlash from netizens who apparently found the image to be degrading. MGAG then followed up with a formal apology.

The Singaporean-based social media company claims that the image was made with the intention of being funny instead of disrespectful, considering the current situation that Malaysia was in.

According to police, the incident is being investigated under Section 509 of the Penal Code for insulting the modesty of a person, and Section 233 of the Communications Act 1998 for using the internet to create and disseminate obscene, indecent or offensive content.

Malaysia experienced a recent spike in Covid-19 cases with outbreaks occurring across the country.

Several of the country’s high-ranking officials, including Prime Minister Tan Sri Muhyiddin Yassin, have been placed under quarantine from exposure to Religious Affair Minister Datuk Dr Zulkifli Mohamad who was confirmed positive for coronavirus.