The bus was spotted outside Pavilion and even near the Houses of Parliament. 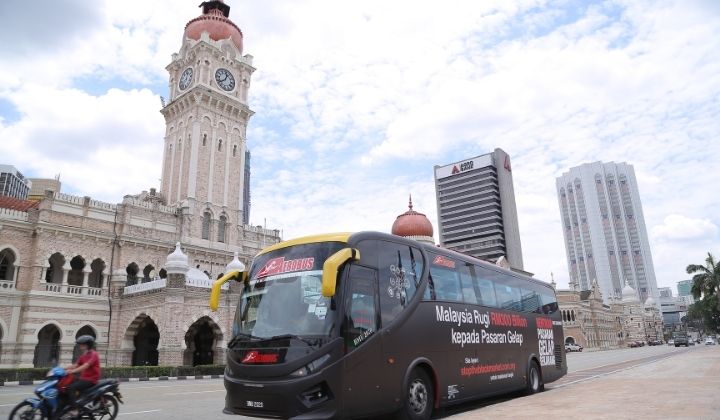 Throughout the whole day yesterday, people have reported seeing a black bus with the message “Stop The Black Market Now” near some of Kuala Lumpur’s famous landmarks.

Also stated on the bus was a statement that says “Malaysia loses RM300 billion to the black market”.

What is the “black market”?

The main message indicates that the bus is part of British American Tobacco (BAT) Malaysia’s Stop The Black Market campaign. In this case, the “black market” refers to the illicit cigarette trade in Malaysia which the campaign aims to raise awareness about.

Illicit cigarettes refer to cigarettes and tobacco products that are smuggled into the country.

A recent report showed that 62% of the cigarettes sold in Malaysia are from the black market, the highest in the world. This translates to a total of RM300 billion lost to the shadow economy, in which the country lost RM5.3 billion to in 2019 alone.

Why are there so many illegal cigarettes sold in Malaysia?

The results of a nationwide survey conducted by BAT Malaysia found that 64% of Malaysians believe high prices of legal cigarettes is the main factor that drives people to buy illegal ones.

The large price gap made illegal cigarettes seem like the more appealing option for smokers. This finding matched the spike that the industry saw in the sale of illegal cigarettes back in 2015, which was when there was a surprise excise duties hike.

So, why is this bus driving around town and even near the Houses of Parliament?

The bus was spotted near Pavilion at the Bukit Bintang shopping district, in front of Dataran Merdeka, and even near the Houses of Parliament at the Lake Gardens.

According to the people behind Stop The Black Market, this is done in hopes to capture more people’s attention and raise awareness about it.

We hope that Malaysians who see the STOP THE BLACK MARKET bus on the road will support our campaign and join the conversation by visiting facebook.com/stoptheblackmarket.