“I’ve been working on this for months,” he says. 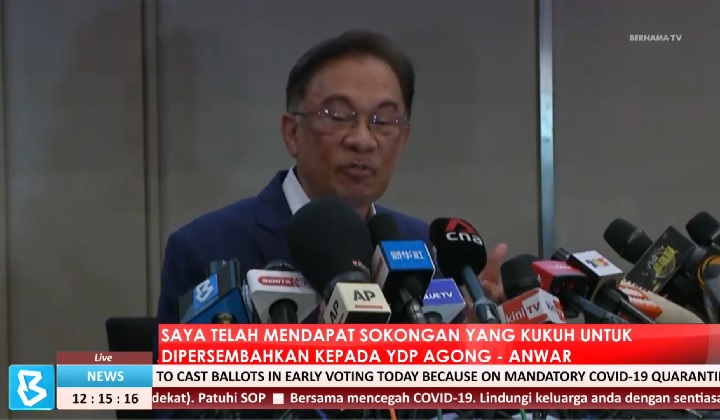 Parti Keadilan Rakyat President Datuk Seri Anwar Ibrahim made an announcement today claiming that he has the “strong, formidable and majority” support of the Parliament to present to the Yang di-Pertuan Agong and form a new govenrment.

Anwar said that he has the support of “close to” two thirds majority which is comprised of various parties, and it includes those in the present government and Barisan MPs.

The majority, he said is among Malay and Islam Members of Parliament (MPs).

He mentions that the number of Members of Parliament (MPs) in his new coalition will be revealed once he has an audience with Yang di-Pertuan Agong.

He also didn’t reveal who would be named as the next Deputy Prime Minister, but jokingly mentioned that it won’t be his wife, Datuk Seri Dr Wan Azizah Wan Ismail.

In the press conference, Anwar said has been granted audience to meet the King earlier this week, but had to postpone due to his Majesty’s admission to Institut Jantung Negara (IJN).

With the majority, it means the government led by Tan Sri Muhyiddin Yassin has fallen. I will reveal the details soon after meeting the Agong.

The PKR President also urged current Prime Minister Tan Sri Muhyiddin Yassin to cooperate, as the Premier can no longer hold the post with the number of seats that he currently has.

When asked what would happen if Muhyiddin dissolved parliament instead, Anwar said the decision to do so is the sole discretion of the Agong.

He said that the audience will be done as soon as possible once the King has recovered, and added that His Majesty has been notified.

Anwar was also asked by the media if MPs who’ve defected to PN will be part of this “new coalition”, he replied: “Dalam senarai saya tak nampak (I don’t see them in the list).”

He was then asked further reporters if this was a “backdoor government”, Anwar instead argued that it was not and claimed it to be a new “format”.

Meanwhile, the Minister of Science, Technology and Innovation Khairy Jamaluddin Abu Bakar tweeted that everything is fine.

Earlier, news surfaced that he will make “an important announcement” at Le Meridien Kuala Lumpur with speculations brewing about Anwar having the majority support of the Parliament, allowing Pakatan Harapan to retake Putrajaya.

It has also been reported that Anwar has requested for an audience with the Yang di-Pertuan Agong who is currently being treated at the IJN.

The Pakatan coalition fell apart in February after the resignation of Former Prime Minister Tun Dr Mahathir Mohamad following a political coup which made way for Tan Sri Muhyiddin Yassin to take over as Premier.