Our condolences to PDRM and Sergeant Patrick. 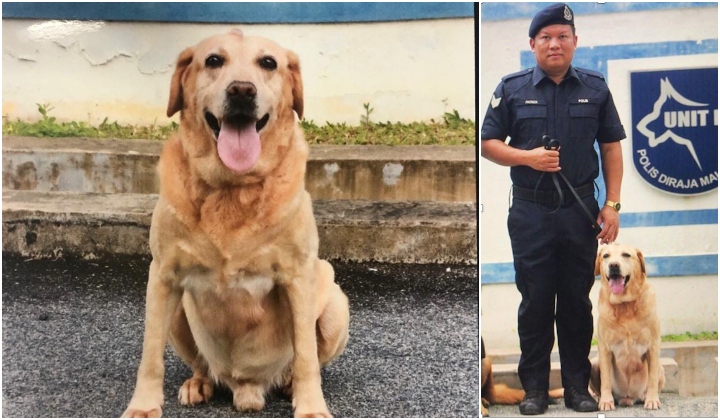 After serving the Royal Malaysian Police force all his life, Tho the labrador, who was a tracking dog attached to the Pahang police K9 division, has passed away.

An announcement of his death was shared on the Criminal Investigative Department of Pahang Police Contingent’s Facebook page.

He is remembered not only for his service in the force, but also for his sensitivity and loyalty to his mentor/owner, Sergeant Patrick Sandai.

Speaking to Malay Mail, Patrick shared how deeply saddened he was by Tho’s passing.

I had been with Tho since he was eight months old and we went for a lot of operations such as night clubs, airports, Malaysian custom checkpoints and other operations.

According to Patrick, Tho was an intuitive animal who could sense when Patrick was stressed or upset, and would even try to comfort his human colleague.

One of the things that I miss about Tho is how sensitive the dog was to my feelings. Whenever I was feeling down, Tho always sat by my side and kept me company. Tho was especially sensitive to my feelings especially when I was sad — and the bond that we had was just so strong.

Patrick noticed that Tho had less energy, so he stopped taking the dog along with him during operations and instead only had Tho participate in his usual daily exercise routines and playtimes.

Then, his appetite started to deteriorate.

And for the past three weeks, the dog’s health worsened. I had to carry Tho to make sure he ate its food as the dog just couldn’t walk as it was too weak. There were times where I had to even feed the labrador.

Comments on the Facebook post saw users sharing their condolences to the police force, and Patrick on the loss of Tho adding that the animal was a true hero that would always be remembered.