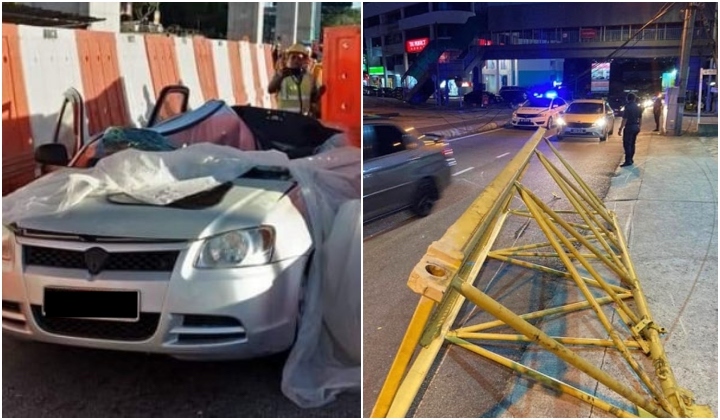 Road users, beware. For the past couple of days, items appear to be falling out of the sky and landing on vehicles.

Yesterday, a woman was just a few inches away from certain death when a piece of parapet wall from the construction of the Sungai Besi-Ulu Klang Elevated Expressway (SUKE) in Kuala Lumpur fell onto her car.

Around the same time in Petaling Jaya, another woman managed to escape unhurt after a portion of a tower crane fell off a trailer and landed on top of her MyVi.

In the first incident, the woman was reportedly driving along the Middle Ring Road (MRR2) from Sungai Besi to Ampang around 5.45pm, according to Cheras police chief ACP Mohd Mokhsein Mohamed Zon.

As she approached a petrol station along that road in Bandar Tasik Selatan, the one-metre square piece of concrete fell on her Proton Saga.

The 25-year-old woman, who was driving a Proton Saga BLM, was rescued by members of the public before being sent to the Tuanku Muhkriz Chancellor Hospital (HUKM) for treatment.

Thankfully, the woman managed to escape with her life. Though, Malaysiakini reported that her left hand was injured in the accident.

A video of the incident has been making rounds online.

The developers of the expressway, Projek Lintasan Kota Holdings Sdn Bhd (Prolintas) have confirmed the accident and immediately issued a stop-work order.

In a statement, the company said it will lend full cooperation to the authorities in the investigation of the incident.

Any inconvenience caused is much regretted and SUKE will ensure that all aspects of safety are prioritised and improved from time to time.

Meanwhile, around the same time roughly 10 kilometres away in Petaling Jaya the second accident occurred.

The 25-year-old woman was reportedly driving home in her Perodua MyVi when suddenly a portion of a tower crane fell on her car, damaging the roof, windscreen and several other parts.

Fortunately, she too managed to escape unhurt.

Members of the public rushed to provide assistance to the victim and help control the traffic situation.

According to Petaling Jaya district police chief Assistant Commissioner Nik Ezanee Mohd Faisal, early examination of the accident revealed that the tower crane had fallen off the trailer after it knocked into two telephone poles along the road while it was being transported.

The victim has lodged a police report of the incident, and the police are still waiting for the trailer driver to do the same.

The case is being investigated under Rules 19 of the Road Traffic Rules 166/59 as the cargo being transported by the trailer has caused an accident, said Nik Ezanee.

“Drunk” Lorry Driver Crashes Into Cars In Sungai Buloh, Turns Out It Was A Heart Attack

Delivery Rider Runs The Red Light, Gets Knocked Over By A Car At Port Klang