He arrived in Malaysia 4 hours before his wife passed away. 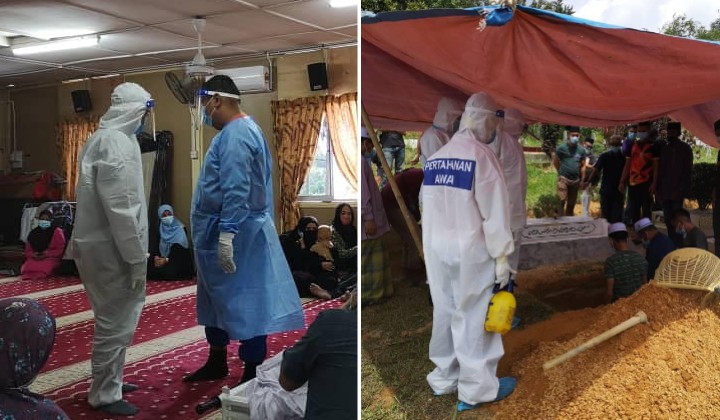 The pandemic denied Lance Corporal Mohd Noh Samsudin any chance to be with his wife, Norhidayah Amishammudin, in her final moments before she passed away due to a lung infection on 17 September.

Part of a United Nations Interim Force In Lebanon (UNIFIL) mission, Noh was deployed to the Middle East for a year to serve as a peacekeeper.

Although he did make the journey back to Malaysia from Lebanon, Noh had to adhere to quarantine orders which prevented him from visiting his wife, despite being at the Kuala Lumpur International Airport (KLIA) 4 hours before she passed away.

Eventually, Noh was given the permission to visit and pay respects to his wife after she drew her last breath, with the help of the Malaysian Armed Forces (ATM) and the Ministry of Health (MOH), but he had to do so while wearing a Personal Protective Equipment (PPE).

Pictures then surfaced online showing Noh during his wife’s funeral with the PPE on the whole time.

Norhidayah’s remains was safely buried at the Kampung Ulu Yoh Islamic Cemetery, Johol, Negeri Sembilan a day after her passing on 18 September.