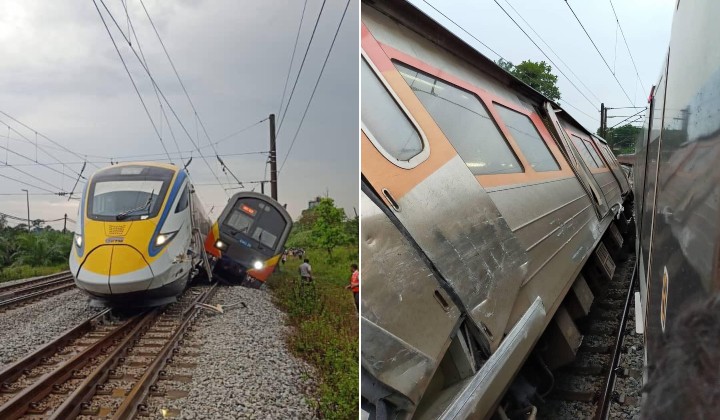 It was a close call when 2 Keretapi Tanah Melayu Berhad (KTMB) trains sideswiped one another near the Kuang Station in Selangor on September 4, 2020.

The collision involved an Electric Train Service (ETS) carrying 93 passengers from Padang Besar to KL Sentral and a KTM Komuter train travelling from Tanjung Malim to Sungai Buloh with 29 passengers.

According to KTMB, 1 passenger onboard the Komuter train had suffered minor hand injuries during the crash while others were said to have safely transferred to other trains to continue their journeys.

Images of the incident showed the 2 trains side by side, with the Komuter train appearing to have taken the bulk of the damage after 1 of its 3 cars laid tilted off the tracks and several of its doors appeared wrecked.

As far as we know at this time, the cause of the incident is still being determined.

KTMB advises the public to expect delays to its train rail services while repairs are being done.