Truly a man of the people. 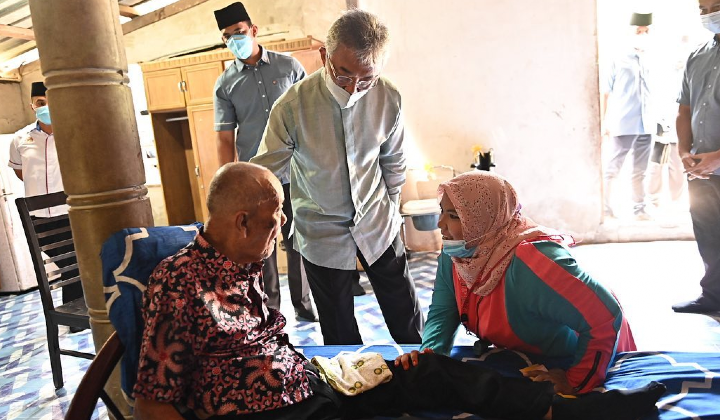 His Majesty personally drove his vehicle to meet the two retirees, first was Nazeri Mohamed Zin, 64, who suffered from stroke in 2012.

His wife, Noorhan Abd Rahim, 59, expressed her gratitude to the King for visiting her husband although he has left the military for more than three decades.

His Majesty also gave donations to Nazeri, who served in the army for 14 years.

The Yang di-Pertuan Agong also visited Hasimah Sulaiman, 62, a former servicewoman, in Kampung Kelat Rendang, Pekan who is also a single mother and has a child with kidney disease.

Hasimah, who has served the military for 12 years since 1977, said her son Mohd Akhmar Hakim, 29, had to undergo dialysis treatment at Pekan Hospital three times a week after both his kidneys were damaged at the age of 17.

The mother of two said that she broke up with her ex-husband around 1994.

She said that currently, her family has to depend on welfare and monthly allowances to survive.

I was initially nervous because I was not a high-ranked personnel, instead I did a lot of administrative work and roadblocks only.

Before making his way back to Istana Abdulaziz in Kuantan, His Majesty stopped by Restoran Kak Nah near Istana Abu Bakar, Pekan for lunch.

The owner, Rosnah Mohd Amin, 68 gleefully welcomed the presence of the Yang di-Pertuan Agong who also paid for the other patrons.