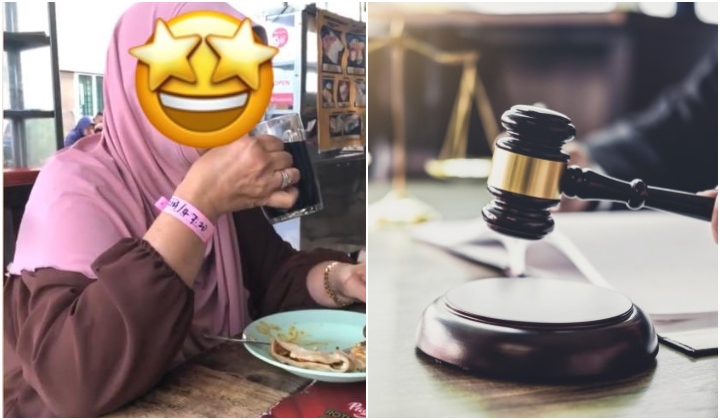 Perak Health Department announced yesterday that they are investigating the viral case in which a makcik wearing a Covid-19 quarantine wrist tag seemed to have breached her quarantine order based on a photo of her which made its rounds on social media.

In the photo, the makcik can be seen wearing her wrist tag with a cup of black coffee in her hand and an empty food plate in front of her at a restaurant believed to be in Bandar Meru Raya.

Perak Health Department Director Datuk Dr Ding Lay Ming said that his department is aware of the Person Under Surveillance (PUS) who has apparently failed to adhere to her Home Surveillance Order (HSU), adding that if it is confirmed that she made the office, appropriate action, including legal action, will be taken.

Which brings to mind the question – What kind of legal action can be taken against someone breaching a self-quarantine order? What kind of punishments might this woman face?

So far, the authorities have not mentioned what section of what law she may be charged under. Also, I’m not a lawyer. So, everything discussed in this article will be just that – a discussion.

We’re assuming the makcik will most likely be charged under the Prevention and Control of Infectious Diseases Act 1988, considering the fact that most legal cases involving Covid-19 before this have been judged under this Act too.

Looking through the Act, we found that Section 15(1) of the Act mentions “surveillance” and sounds as close as possible to the order the makcik is probably under.

(1) An authorized officer may order any contact to undergo observation in such place and for such period as he may think fit, or to undergo surveillance until he may be discharged without danger to the public.

Section 15. Observation or surveillance of contacts, Prevention And Control Of Infectious Diseases Act 1988

However, this section doesn’t mention offences or penalties. Instead, we found that in Section 22 and 24 of the Act.

Okay, so now that we know what the law says, we look to how similar cases have been judged in the past. A quick Google search brings up two cases.

How previous cases were judged

The first involves a man in Sibu who had violated his home quarantine order by going to a coffee shop in Sibu Jaya to have a plate of kampua noodles.

According to the report by The Edge Markets, the man also uploaded pictures of himself committing the offence on Facebook with a caption saying that the plastic QR-coded wrist band can actually be easily taken off and put back on.

He was charged under Section 22(b) of the Act mentioned above, which is punishable under Section 24 of the same Act, and fined RM5,000, or five months jail if he fails to pay.

The second case we found involves a retiree and his son-in-law who both breached their home quarantine order. According to Bernama, the duo pleaded guilty under Section 15 (1) of the Prevention and Control of Infectious Diseases Act 1988, punishable under Section 22 (b) of the same Act.

The retiree was sentenced to a Compulsory Attendance Order (PKW) to perform community service for four hours a day for two months, while a RM2,000 fine was imposed on his son-in-law, or eight months jail time if he fails to pay.

As you can see, both cases mentioned above were charged and punished under either of the three sections from the same Act. So, we figure that it’s likely the makcik will also be charged in a similar way.

But, we’ll have to wait for the authorities decision to be sure.