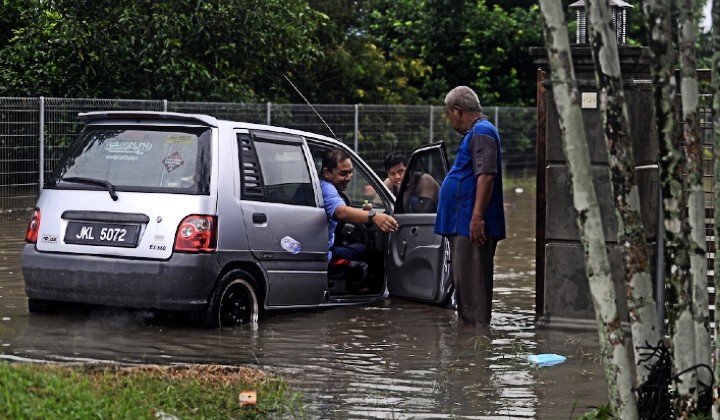 Over the past few weeks, certain parts of Malaysia have been experiencing bouts of stormy weather and episodes of flash floods.

In the Klang Valley, heavy rains and strong winds fell trees and caused flooding in several parts of Kuala Lumpur.

Selangor had its share of flash floods, with areas in five different districts; Gombak, Klang, Sepang, Hulu Langat, and Hulu Selangor underwater, with some members of the public forced to leave their homes and relocate to temporary flood relief centers.

Floods have also been reported in parts of Johor, Melaka, Penang, Kelantan as well as the East Malaysian states of Sabah and Sarawak.

Well, it appears that Malaysians would need to brace for wetter days ahead, as experts are forecasting the wet spell to continue, despite it supposedly being the Southwest Monsoon dry season.

Usually during the Southwest Monsoon, which begins from May till September. Malaysia would experience less cloud cover and minimal rainfall due to the stable atmospheric conditions and low moisture winds blowing from the southwest direction.

The Malaysian Malaysian Meteorological Department (MetMalaysia) had even previously predicted for areas across the Peninsular and East Malaysia to receive less and longer days without rain and thunderstorms throughout the season.

But as it appears, mother nature has her own plans. MetMalaysia now says that the stormy and cloudy days would follow us till the end of July.

The department explains that the recent storms were caused by winds blowing from the northeast and southwest side, as well as on the southwest and southeast side of the Peninsular are converging into each other respectively.

MetMalaysia advised Malaysians living in flood-prone areas to safeguard their lives and property and be ready for emergency evacuation and warns the country’s seafarers and fishermen to be careful of unexpected storms on the high seas.

Additionally, with the advent of the Covid-19 pandemic, the government is also concerned that the floods happening across the country could bring about an unwanted outbreak.

As residents in affected areas crowd relief centers, the Malaysian Health Ministry (MOH) is apparently on high alert to ensure that proper Covid-19 standard operating procedures (SOP) are implemented in shelters and for hygiene and social distancing measures to be practiced at all times.