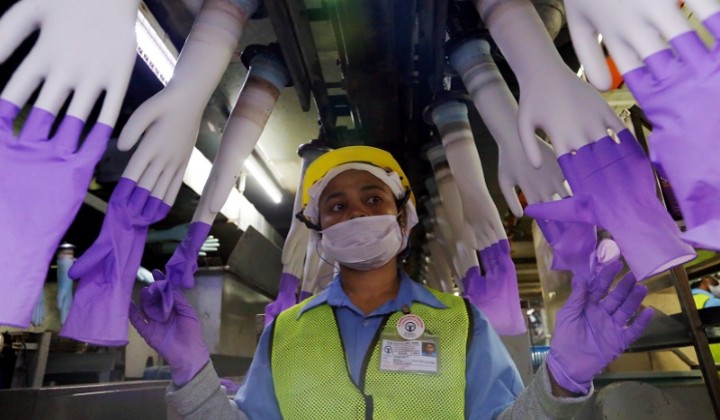 Malaysian glove making company Top Glove aka the world’s biggest glovemaker was hit by a detention order by the US Customs and Border Protection on their products.

While there is no confirmation on the exact reason for the detention order the action appeared to be prompted by allegations of labour abuse.

To put into perspective just how mammoth Top Glove is – the Malaysian company makes one in every five gloves globally.

With the Covid-19 outbreak causing a surge in demand for rubber gloves – an essential part of personal protective equipment (PPE) – Top Glove’s profits surged 366% in three months since Covid-19 was declared a pandemic and the net worth of its founder, Tan Sri Lim Wee Chai ballooned to USD2.5 billion (RM10.69 billion).

In fact, the pandemic also gave Malaysia two new billionaires from the rubber industry thanks to the surging demand.

How things got out of hand

Top Glove is no stranger to forced labour allegations.

In 2018, UK newspaper The Guardian made shocking revelations on the treatment of migrant workers at the Malaysian manufacturing plant where they were allegedly subjected to forced labour, forced overtime, debt bondage, salaries withheld and passports confiscated.

The Top Glove workers – eight from Nepal and eight from Bangladesh – alleged that their factory was “mental torture” where they had to work seven days a week, at least 12 hours a day, with only one day off a month. Their shirts were each branded with the Top Glove logo: “Be honest and no cheating.”

However, the company denied the allegations and released a statement saying that they now implemented strict measures to ensure that the overtime undertaken by their workers does not exceed the maximum limit permitted under Malaysian labour laws.

But it didn’t stop just there.

Once again, at the height of the Covid-19 pandemic, forced labour allegations reared again following an investigation by UK’s public television network Channel 4 in June 2020.

In their report, Channel 4 revealed the squalid living conditions of migrant workers and lack of social distancing at Top Glove’s Malaysian factories with interviews by workers who said that they’re compelled by the company to work 12-hour shifts, six days per week.

The report also points out that workers are paid the national minimum wage of RM1,200 and overtime of RM8 an hour but claim that deductions are made for “lateness and clocking out early from the factory.”

Every employee’s safety, health and well-being has always been of utmost importance to Top Glove, all the more during this Covid-19 era. We are committed to adhering to internationally recognised standards in our social compliance practices. Since January 2019, we have attended to more than 100 international external audits at Top Glove’s factories.

Then one month later in July 2020, gloves manufactured by its subsidiaries Top Glove Sdn Bhd and TG Medical Sdn Bhd were placed under detention by the US Customs and Border Protection.

Right after Top Glove confirmed the news on 16th July, their share prices nosedived until Bursa Malaysia unexpectedly closed all trades at 3.30pm due to “technical issues.”

According to The Edge, Top Glove’s shares swiftly rebounded into positive territory as Bursa opened at 9am on 17th July.

CGS-CIMB Research advised investors to buy as Top Glove is still expected to post record-breaking profits in the near future while Kenanga Investment Research expects the issue to be resolved in an amicable manner.

This is largely due to the acute shortage of rubber gloves globally which means the company will be able to find customers elsewhere.

Not only that, there is precedent that the detention order could be lifted.

Another Malaysian glovemaker WRP Asia Pacific received a similar detention order in Sept 2019 due to similar forced labour allegations, but the US then revoked it in March 2020 following the global Covid-19 outbreak.

While Top Glove works to resolve the issue with the US Customs, it looks like they’ll still come out on top.