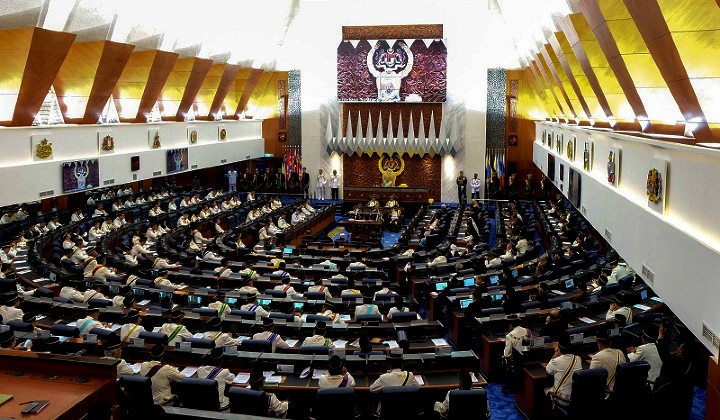 The Dewan Rakyat convenes for Day 2 of the Second Meeting of the Third Term for Parliament 2020.

10: 15 am – Dr. Kelvin Yii Lee Wuen (DAP-Bandar Kuching) questions the Home Minister on the government’s plan to improve the process and guidelines for stateless children in Malaysia to attain citizenship. In reply, Home Minister Datuk Seri Hamzah Zainuddin said that the government has updated its standard operating procedures (SOP) to speed up the registration processes for stateless persons below the age of 21.

10: 30 am – Wong Hon Wa (DAP-Bukit Bendera) asks the Ministry of Housing and Local Government on the status of local government elections, In reply Housing and Local Government Minister Zuraida Kamaruddin said that the ministry, since 2018, was still in process of preparing a proposal to be presented in 2021. The ministry had also formed committees to review issues regarding policies and mechanisms for elections, educate the public as well as research on local election “models” based on other countries that could be implemented in Malaysia.

11: 00 am – M. Kulasegaran (Independent-Ipoh Barat) asks the Human Resource Ministry on the impact of the Covid-19 pandemic on unemployment in Malaysia as well as the implementation of government’s Covid-19 aid programs to supplement the economy as well as Malaysian jobs.

12:10 pm – Parliament proceeds to discuss orders of the day and motions.

12: 20 pm – Datuk Seri Ahmad Maslan (BN-Pontian) in a speech to the Dewan said that the Perikatan Nasional (PN) government as well as the appointment of Tan Sri Muhyiddin Yassin as Malaysia’s 8th Prime Minister was valid, “Ini kerajaan pintu istana yang sah, bukan kerajaan pintu belakang (this is a royal government and not a backdoor government),” he said.

12:50 pm – Dewan Rakyat goes back and forth arguing the validity of the PN government with the opposition claiming that the PN administration had not been mandated by the rakyat. Members of Parliament (MPs) aligned with the government asserted that PN’s rise to power was a matter of circumstances and was done so in accordance with the nation’s laws.

12: 50 pm – Ahmad Maslan (BN-Pontian) continues with his speech, thanking the Malaysian public, especially the nation’s frontliners for their efforts to combat the Covid-19 pandemic, besides praising the PN government’s actions in implementing measures to supplement the economy. Datuk Ngeh Koo Ham (PH-Beruas) interrupted by saying that the government’s actions during the pandemic should not be counted as a win as the country is now deeper in debt, owing to some RM3.5 billion.

Afternoon Session – Orders of the Day and Motions

3:00 pm – Ahmad Maslan (BN-Pontian) continues with his speech, requesting the PN government to provide updates on various issues pertaining to the rakyat, the economy, immigration, education, unemployment, infrastructure, housing and etc. and the government’s plans for the future in lieu of the previous PH administration.

3:15 pm – Ahmad Maslan (BN-Pontian) adds that the government should bring back programs that were discontinued under PH, such as the National Service Training Program (PLKN), the National Civics Bureau (BTN), and the government pension scheme, among others.

3:25 pm – Ahmad Maslan (BN-Pontian) proposed for the government to take on an “economic revolution” aimed at ensuring that Malaysians would earn a median monthly household income of RM8,000 as well as initiate a “quantum leap” to transform the rakyat, especially the Bumiputeras, into high-income earners and entrepreneurs.

4:15 pm – Ahmad Fadhli Shaari (PAS-Pasir Mas) takes the floor and asks the government to review the terms, conditions, and thresholds of its social aid programs such as the National Database on Poverty (eKasih) in light of the latest national poverty line (RM2,208), as well as for the government to fully take into account the ongoing disparities between the urban and rural communities in Malaysia.

4:45 pm – Ahmad Fadhli (PAS-Pasir Mas) continues stating that the government should take proactive measures to address issues and weaknesses pertaining to the country’s infrastructure that was brought to light during the Covid-19 crisis. Adding on to the topic, Syed Saddiq Syed Abdul Rahman (Independent-Muar) hopes that there would be a bipartisan effort to continue with PH’s National Fiberization Connectivity Plan on widening the nation’s internet connectivity.

4:55 pm – Datuk Seri Anwar Ibrahim (PH-Port Dickson) takes the hall and expresses anxieties that the “new normal” caused by the Covid-19 pandemic would bring about “old” systemic problems with corruption within the government.

4:58 pm – “Because we know the damage did not start with Covid-19, corruption spreads in such a systemic manner that it could be called a culture that is difficult to overcome unless we seriously committed and incessantly create a new culture.” said Anwar Ibrahim (PH-Port Dickson) while posing the question on how Malaysia is expected to come to a “new age” if old habits continue.

5:20 pm – Anwar Ibrahim (PH-Port Dickson) questions why the government’s Covid-19 economic stimulus package was passed without a parliamentary debate, mentioning a need for more fiscal injection into government aid and social security programs, while adding that Parliament must be utilized to debate government actions.

5:30 pm – Parliament suspended today’s session and would continue at 10 am tomorrow.