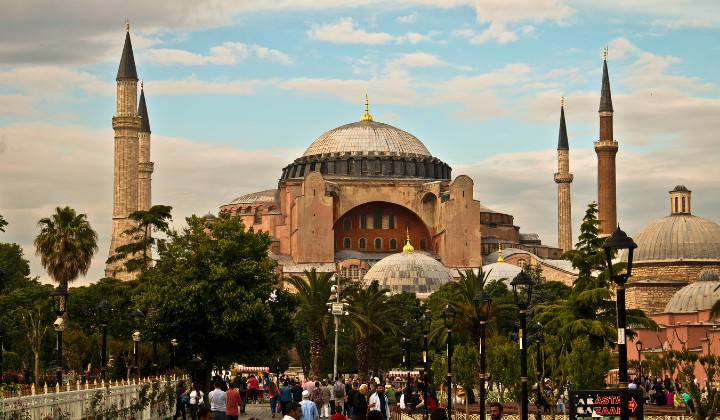 The Turkish government has reportedly changed the status of Hagia Sophia, which has been a museum for the past 80 years, back to being a mosque.

International news agencies reported that the announcement about the historical building was made by Turkish President himself, Recep Tayyep Erdogan.

If you’re wondering why this is such a big deal, the Hagia Sophia is the most important Byzantine structure, and one of the world’s greatest monuments. It might be the one and only structure that has been used as a place of worship for three different religions.

The structure originally built on the site of Hagia Sophia was a Christian cathedral called the Megale Ekklesia (Great Church in Greek), because of its immense size. Prior to that, the site had been the location of a pagan temple.

Around 430CE, the church then came to be known as the Hagia Sophia (Holy Wisdom in Greek). After being destroyed in several riots and fires, the building was recommissioned in the 6th century under the Byzantine emperor Justinian I who was the ruler of Constantinople, present-day Turkey.

Much of what you see today of the Hagia Sophia was completed in the 6th century, some 1,500 years ago.

When the Ottoman Empire conquered Constantinople in 1453, Sultan Mehmed II had the church repurposed as a mosque. A wooden minaret, a great chandelier, a mihrab (niche indicating the direction of Mecca), and a minbar was added to the structure.

It would remain a mosque until being converted into a museum in the 1930s after President Kemal Atatürk secularised the building.

Now it is considered a Unesco World Heritage site, many consider the building a bridge between two faiths, and a symbol of co-existence.

Like all our mosques, the doors of Hagia Sophia will be wide open to locals and foreigners, Muslims and non-Muslims

According to President Recep Tayyep Erdogan, the first Muslim prayers will be held inside the building on Friday, 24 July 2020.