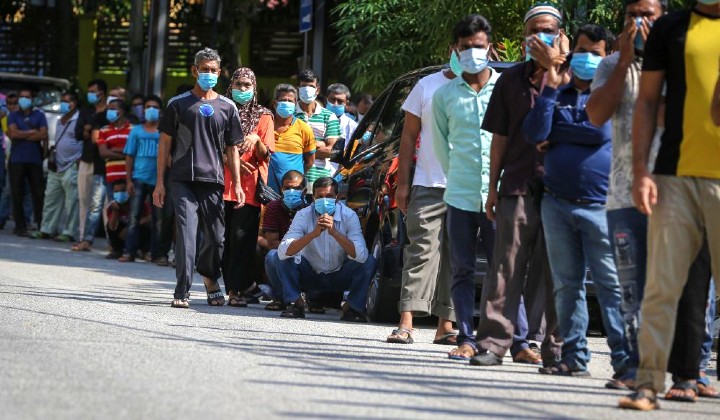 The Royal Malaysian Police (PDRM) is investigating reports against Al Jazeera made by the Immigration Department for allegedly tarnishing Malaysia’s image through a documentary on the treatment of migrants by authorities during the movement control order.

The Immigration Department has also issued a notice seeking public information on the Bangladeshi national who appeared in the documentary.

What you need to know: The Al Jazeera documentary in question was a recently aired, 25-minute documentary titled “Locked Up in Malaysia’s Lockdown” that involved interviews with migrants about how they were treated in the country’s effort to curb the spread of Covid-19.

This included their experiences during a raid by authorities on Jalan Masjid India on 1 May which led to the arrest of several undocumented foreigners, which the news agency described as racist and inhumane.

The Malaysian public has conflicting views on the matter, with some supporting the documentary saying that migrants, regardless legal or illegal, should be treated with respect, even when being taken into custody.

Meanwhile, many other Malaysians agree with the authorities actions, saying that illegal migrants have committed a crime in the country and therefore should be arrested and sent back to their home countries.

Why it matters: The documentary raises allegations of mistreatment and persecution of foreigners at the height of Malaysia’s battle against the Covid-19 pandemic.

At the same time, there are concerns that harsh punishments towards the press would limit press freedoms and cover-up wrongdoings by the authorities.

On the other hand, the accuracy of the report is being disputed by Malaysian officials including Senior Minister (Defence) Datuk Seri Ismail Sabri Yaakob and Health director-general Datuk Dr Noor Hisham. If it is indeed inaccurate, then it raises the question of whether it unfairly harms the reputation of the country.

Who said what: Ismail Sabri has urged Al Jazeera to issue an apology to Malaysians over its report, saying the documentary had malicious intent and filled with blind accusations.

Lies, ill-intentioned and without clear facts.

Health Minister Datuk Seri Dr Adham Baba said the allegation was baseless as Malaysia introduced MCO to save everybody from Covid-19, regardless of whether the person is a citizen or not.

Immigration director-general Datuk Khairul Dzaimee Daud has indirectly warned all those that took part in the documentary to “be careful when making any statements”, saying that they could be deported for their actions.

They are facing the risk of revocation of their passes and will be required to leave the country immediately if the statement is inaccurate and aimed at damaging Malaysia’s image.

On top of that, Datuk Dr Noor Hisham himself has assured that there was no mistreatment of child immigrants in the detention centre as implied by the documentary.

Antrabangsa NGO also spoke up about the matter assuring the public that the illegal migrants that had been placed in detention centres were being well treated.

Latest information by officials: According to Datuk Khairul Dzaimee Daud, during the operations conducted in Jalan Masjid India, the immigrants were not handled roughly.

He said that during the operations conducted in Jalan Masjid India on 1 May, a total of 3,352 immigrants were inspected, but only 586 individuals were detained for further investigation.

He added that the government had also provided free treatment to 773 foreigners who tested positive for Covid-19.

Meanwhile, Ismail Sabri pointed out that undocumented migrants were holed up in their homes just like other migrants or citizens during lockdowns, adding that they were also screened for Covid-19 with the government bearing the costs, just like everybody else.

How it got here: On 1 May 2020, SCMP reported the raid by authorities on Jalan Masjid India. The piece detailed how Malaysia’s civil defence, police, and immigration officials conducted an operation there to test for Covid-19, which ended with them arresting an unconfirmed number of undocumented foreign workers.

The area had earlier been identified as a Covid-19 red zone due to a spike in cases. The buildings were swiftly put under an enhanced movement control order (EMCO) and barbed wires were set up around the premises to prohibit people from entering and exiting.

The raid was heavily criticised by human rights activists who pointed out that the government had recently assured that immigrants did not have to fear identifying themselves to the authorities, encouraging them to come forward and be tested for Covid-19, and promising them that they would not be detained.

We Sprayed Dettol On Everybody, Including Each Other, Says Immigration After Recent Incident