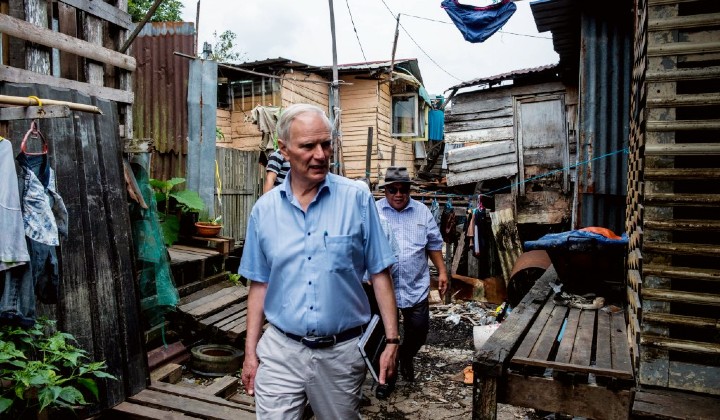 The United Nations’ (UN) Report of the Special Rapporteur on Extreme Poverty and Human Rights recently made available online today reveals the troubling reality of poverty in Malaysia and its devastating effects.

The 20-page report prepared by the former Special Rapporteur on extreme poverty and human rights, Philip Alston, was compiled following a August 2019 visit to Malaysia where he travelled to Kuala Lumpur, Selangor, Sarawak, Sabah, and Kelantan.

His presence was to report to the Human Rights Council on the extent to which the Government’s policies and programmes relating to extreme poverty are consistent with its human rights obligations and to offer constructive recommendations to the Government and other stakeholders.

Here’s some of the devastating realities revealed in the report:

Poverty is effectively a crime in Malaysia

Philip noted that poverty is in effect criminalized by the Destitute Persons Act, which allows authorities to take into their charge people deemed destitute and penalizes resistance with up to three months’ imprisonment.

Civil society groups have pointed out that the Act has been used to detain homeless people without trial.

In response to the report the government said that in order to control vagrancy, any person who refuses or resists to be taken will be charged under section 11 and on conviction, will be sent to a welfare home or to imprisonment.

Malaysia’s social protection in 2017 was lower than all Southeast Asian countries for which data was available.

The report also pointed out the strangeness of Malaysia’s social protection spending not rising in step with gross domestic product (GDP), alongside inadequate investment and schemes, results in only small irregular benefits that are too small to make a real difference.

The social protection system is fragmented, inadequate, underfunded and poorly targeted. Most importantly, as UNICEF has noted, the system has “virtually no redistributive or poverty reduction impact.”

Report of the Special Rapporteur on Extreme Poverty and Human Rights

We still have child labourers

It turns out that the child poverty rate in Malaysia is three times the national poverty rate with no adequate support system addressing the problem and the Social Welfare Department financial assistance scheme declining since 2013.

Child labour is also highlighted as a deep concern, especially in palm oil plantations where an oppressive quota system drives families to bring their children to work as unpaid labourers.

The missed-opportunity cost of child labour, as well as inability to afford school uniforms, books and supplies keeps children in very low-income families out of school.

The report also understands that poverty inadvertently becomes a main driver of child marriage which has severe implications on children including increased risk of health problems and loss of education.

In the report, Philip writes that the indigenous people or Orang Asli have the highest overall poverty rate and are in desperate need of better protection of their customary land rights and more effective access to quality health care and education.

One challenge he notes in reviewing the existing data on poverty and inequality is that it is not presented in a manner that distinguishes gender or differences between Malay and non-Malay Bumiputera, which obscures crucial details including the reality of the Orang Asli’s situation.

The report also highlights that no government official could produce an assessment of educational outcomes for indigenous peoples.

Indigenous peoples continue to face discrimination despite laudable commitments to promote their rights. Government officials misunderstand or dismiss their goals and ways of life with alarming regularity.

Women are not working due to housework

In 2018, 60% of women not working stated housework as the main reason for not seeking employment, while only 3.6% of men feel the same.

Women in Malaysia shoulder a disproportionate share of housework, have an exceptionally low rate of workforce participation, are disproportionately stuck in lower-level jobs and are paid less than men.

Report of the Special Rapporteur on Extreme Poverty and Human Rights.

LQBTQIA are overrepresented in poverty statistics

Due to persistent stigmatization and discrimination, lesbian, gay, bisexual, transgender, queer and intersex people are overrepresented in poverty rates compared to the rest of the population.

In a statement released today following the release of the report, Philip found that Malaysia’s national poverty rate of just 0.4%, the lowest in the world, was based on a statistical sleight of hand.

Even with the change in government, the administration stands by the national poverty line of RM 980 per month for a household of four, about RM8 a day for one person to survive on.

He concluded that the current poverty line is inadequate and almost universally considered to be misleadingly low, and obscures the troubling reality that millions scrape by on very low incomes, now more so with Covid-19.

Philip’s successor, Olivier De Schutter, is scheduled to present the report to the UN Human Rights Council on 7 July.

Read the full report on the United Nations website (HERE).