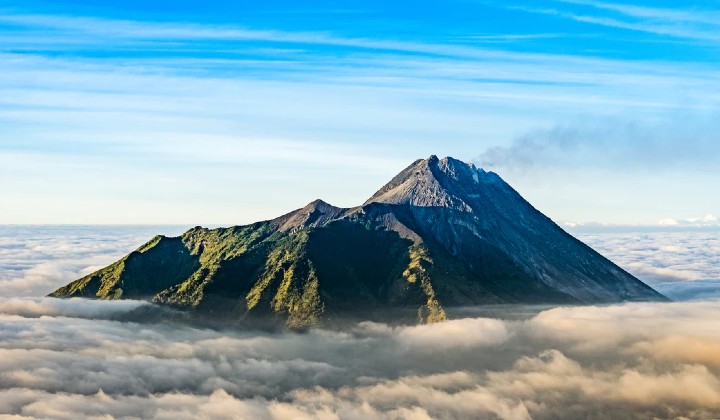 Indonesia’s Mount Merapi, one of the most active volcanoes in the world, blew its top, twice, over the weekend.

The double eruption, which happened on Sunday (June 21), spewed clouds of ash and smoke some six kilometers into the sky, and sent shockwaves that could be felt some 50 kilometers away from the rumbling mountain.

The eruption had prompted Indonesian authorities to set up a three-kilometre exclusion zone around the mountain, ordering locals, tourists and even airplanes to stay clear of the area.

However, the eruption did not cause Indonesia’s National Disaster Mitigation Agency to raise Merapi’s alert status from Level-3, the third-highest warning level for the volcano, which had been acting up since August 2019.

Eruptions at Merapi are usually a cause for concern as the volcano has the tendency to spew pyroclastic flow – clouds of superheated hot gas, and volcanic rock – when it explodes, which causes major devastation to the surrounding areas.

The volcano also releases plumes of sulfur dioxide and other elements that are not only harmful to life, but can also have an effect on the Earth’s climate by blocking out the sun and cooling the planet’s temperature.

If all this talk of volcanic plumes and toxic gases have you feeling a little uneasy. Fret not fellow Malaysians, as according to the Malaysian Meteorological Department (MetMalaysia), the winds are blowing in our favor this time around, and are pushing volcanic clouds away from our direction with the nation’s Air Pollution Index (API) looking normal across the board.

There are also no earthquakes or tsunamis heading our way too.

Located just 30 kilometers away from Indonesia’s cultural centre, Yogyakarta, Mt Merapi is just one of the Republic’s over 100 active volcanoes.

The mountain had earlier erupted in March 2020 and has had several major eruptions since the year 1006. The last time Merapi had a major fit was in 2010, in an eruption that killed more than 300 people.