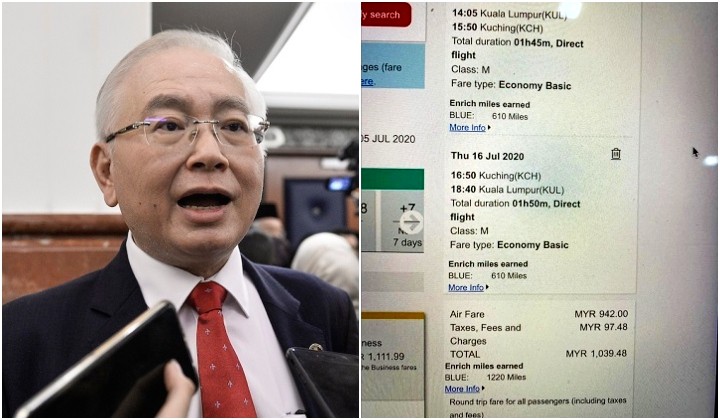 Transport Minister Datuk Seri Wee Ka Siong has said that Malaysians should give airlines time to “normalise” their ticket prices.

After a meeting with Malaysia Airlines, AirAsia and Malindo, the minister took to Facebook to explain that the airlines had been under tremendous financial pressure during the pandemic with 97% drop in passenger volume.

Without passengers, their expenses continue to push them to the verge of bankruptcy.

However, he also stated that airlines should set reasonable prices that do not burden the rakyat, commending the three airline CEOs for doing their best to bring down the fares.

Following feedback from the airlines, Wee said that flight bookings should be done early as fares would not begin to drop drastically especially for short-notice bookings to fly within a day or two.

He explained that the ticket price for flight bookings made two or three weeks prior to departure may be half the price of tickets bought two days before departure.

Bernama had earlier reported Wee stating his hope for airlines to reduce ticket prices with the cancellation of social distancing on board aircrafts in line with International Air Transport Association (IATA) guidelines.

He told the news agency that the Transport Ministry cannot interfere in ticket sales but are asking for their “good office” (his words) to reduce ticket prices.

The aviation industry was one of the first industries to be crippled by the global spread of Covid-19.

Last week, it was reported that AirAsia will retrench up to 300 employees, including pilots, engineers and cabin crew. Malindo has asked staff to take unpaid leave, followed by up to 50% pay cut, while Malaysia Airlines offered unpaid leave and inducing salary cuts of between 10% and 35% among employees.