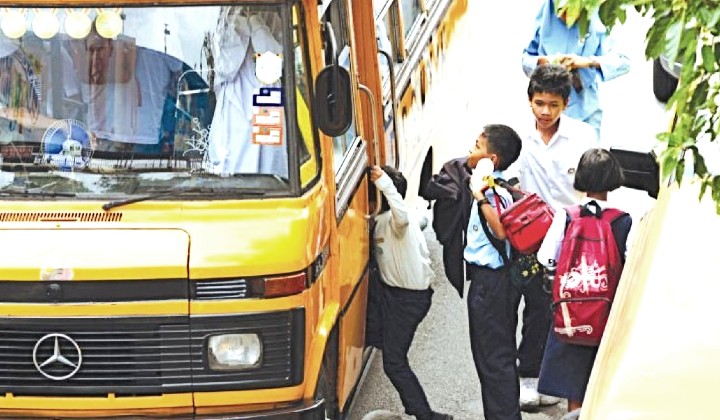 Parents might have no choice but to pay higher fees to ensure that their kids remain safe from Covid-19 on their way to and from school.

Part of the government’s guideline in allowing schools to reopen is for school bus operators to limit their number of passengers in order to maintain social distancing.

This would in turn reduce the efficiency of school busses, forcing some to make multiple trips in order to meet demand.

Speaking to The Star, Melaka Action Group for Parents in Education Chairman Mak Chee Kin said that the new normal school year, expected to begin soon, would result in bus operators having to increase their fees as they would have to make more trips and operate for longer hours in order to ferry children around safely.

Although parents are hopeful that bus operators won’t be hiking their prices anytime soon, they were also preparing for the inevitable. Faced with this dilemma, some parents might opt to send their children to school themselves, while others would not be as fortunate to do so.

For Mathilda Lopez, the thought of paying extra does not bother her too much as without such a service it would be difficult for the working woman to transport her kids.

Another mother by the name of Liana Haris told The Star that as long as school bus operators adhere to the Covid-guidlines set by the authorities, she has no qualms about paying more.

This was also true for Nicole Yoong, who said that she’s willing to pay 20% more than what she pays now (RM480 per-month for one kid) to provide her child with trustworthy transportation.

Parents also share the concern that their children might have to get up earlier in order to catch the bus to school and come home later as busses would need to complete multiple trips in order to send all of their passengers to and from their destinations.

School bus operators also appeared to be jammed in a tight spot.

Federation of School Bus Associations Malaysia President Amali Munif Rahmat told The Star that, for the time being, operators won’t be facing too many problems as currently, only secondary Form 5 and Form 6 students are being allowed back in school.

But as soon as school sessions return to normal, their problems would follow as he claims that even the government itself was not too sure of how to handle the situation.

One school van driver by the name of Kohilah spoke to the star about the difficulties of adjusting her trip schedule to fit in multiple journeys in a day, though mentions that she won’t be increasing her fees anytime soon despite having losing out on income during the nationwide lockdowns.

Meanwhile, other school bus operators are forced to go get creative in charging customers.

Malar who operates in Subang Jaya told The Star that instead of charging a fixed fee for individual passengers, the driver is opting to charge parents on a trip-by-trip basis, modeling fees based on what a Grab car would offer for the same distance trip.

Previously, The Transport Ministry also hinted at increasing fares for public transportation like buses and trains after operators complained of losses due to social distancing rules.

This would also inevitably affect parents and children who also depend on these services to travel to and from school.