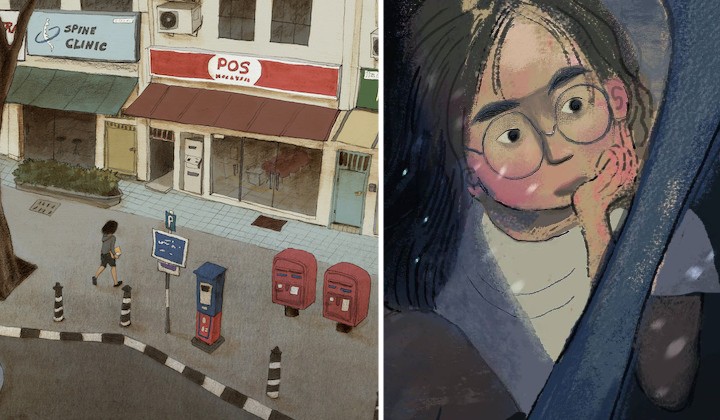 A Malaysian animator, illustrator, and comic artist Erica Eng has been nominated for the prestigious Will Eisner Comic Industry Award. The Eisner Awards are the comic industry’s equivalent to the Academy Awards.

Her webcomic Fried Rice was nominated for the Best Webcomic category with six other titles internationally.

Winners will be announced in July after an online vote by comic industry professionals.

Fried Rice is an autobiographical fiction set in Malaysia. The art is familiar and nostalgic, giving local and international readers a slice of Malaysian life with every update.

The webcomic follows a young girl named Min from Batu Pahat, Johor. She visits her cousin in Bangsar, Kuala Lumpur while applying to an art school in New York.

The comic is based on the artist’s experience after graduating high school and wanting to be an artist and animator.

It’s a little naive and idealistic, because that was the way I was out of high school.

The 21-year-old is currently pursuing a 3D character animation degree with the Academy of Art University in San Francisco, California.

She’s also extremely proud of the food from Batu Pahat, claiming that it’s the best food in the world, adding that she will draw it into Fried Rice at some point.

Fried Rice is still a work in progress, expected to have a length of 150 to 200 pages. Currently, only 47 pages are published. Erica updates every Sunday morning, citing that she loves the story and is committed to finish it.

Erica Eng is the fourth Malaysian to ever receive an Eisner nomination. In 2018, Reimena Ashel Yee was nominated for the Best Digital Comic award for her webcomic-turned-graphic novel The Carpet Merchant of Konstantiniyya. In 2017, Seremban-born, Singapore-based Sonny Liew received six nominations for his accliamed graphic novel The Art of Charlie Chan Hock Chye. A decade earlier in 2004, Tan Eng Huat under the pseudonym Kutu was nominated as Best Penciller and Inker for his work on DC Comics’ Justice League of America.

Who, What, And How A Local Artist Made RM1.6 Million In 24 Hours Selling NFT Digital Art