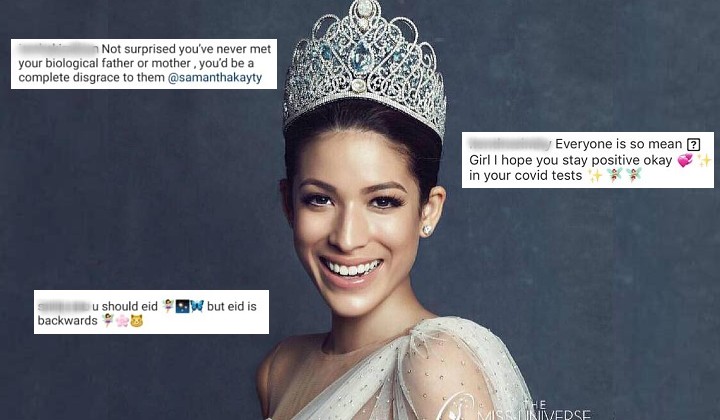 A quick scroll through her Instagram account reveals numerous comments disparaging her intellect, looks, familial relationships and even insinuation that the Miss Universe Malaysia 2017 winner should be dead.

The online vitriol directed at Samantha has also been a cause of concern with several Malaysians questioning the targeted harassment, including comedian Harith Iskander who took to Facebook to say there are responses bordering on cyberbullying and that she is an easy target for the internet as a woman and former beauty queen.

Some even voiced out that the harassment was no contribution in addressing racism and the Black Lives Matter cause.

And the issue is not a new one in Malaysia

Cyberbullying includes sending, posting, or sharing negative, harmful, false, or mean content about someone else, including sharing personal or private information about someone else causing embarrassment or humiliation through digital devices.

Back in 2018, a global study among 28 countries found Malaysia as the 6th worst nation in cyberbullying, and the second worst in Asia, faring slightly better than India.

A poll by the United Nations Children’s Fund (Unicef) in 2019 also found that three in 10 young Malaysians are victims of online bullying,

A 2015 study published in the Computers in Human Behaviour journal noted that females outnumbered males as cyberbullies and cybervictims. It also found that there is a tendency for cybervictims to become cyberbullies, and vice versa.

Former Communications & Multimedia Minister Gobind Singh Deo had said in May 2019 that the Communications and Multimedia Act (CMA) 1998 might need to be amended following the death of a teenage girl who was believed to have committed suicide after she ran a poll on Instagram asking if she should do so.

However, there has been no updates on the matter.

Just last month, a 20-year-old Malaysian woman hung herself to death after becoming the target of online ridicule over a Tik Tok video of her with a colleague who happened to be a foreigner.

TRP urges everyone to use the internet responsibly and refrain from cyber-bullying and harssment.

If you or anyone you know of are having problems or thoughts of suicide, please reach out to Befrienders via:
Tel: 03-7956 8145
E-mail: sam@befrienders.org.my
Available 24 hours every day, 7 days a week.
Calls from 8 local telcos are FREE.