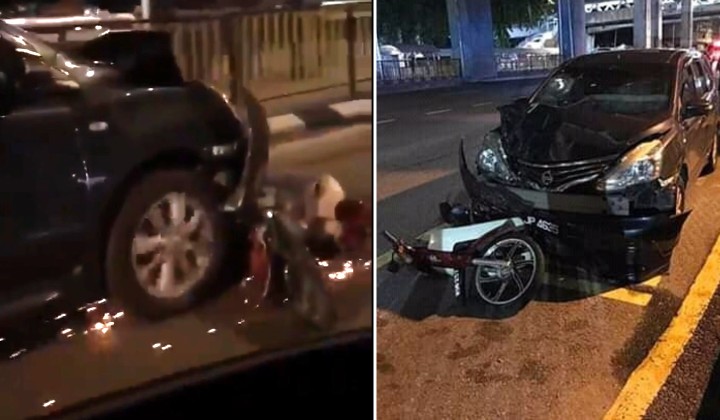 A food delivery rider died in the early hours of the morning after a suspected drunk driver crashed into his motorbike at the Sultan Iskandar Highway in Kuala Lumpur.

Malay Mail reports that the 1.30 am accident involved 44-year-old victim Mohamed Zaili Mohamed, a contract worker who was on his way home to Bukit Antarabangsa after delivering food sold by his wife.

The police have clarified that he was not a rider under FoodPanda despite images of the food delivery service bag seen at the accident site.

Kuala Lumpur Traffic Investigation and Enforcement Department chief ACP Zulkefly Yahya said that it is believed that his motorcycle was struck from behind by a dark blue Nissan Grand Livina.

The hit led to the victim crashing into the shoulder of the road and his motorcycle was dragged for around 2km. Mohamed Zaili died on the spot with severe head injuries, while the 21-year-old driver was unharmed.

According to ACP Zulkefly, the driver stopped under the Titiwangsa LRT station pedestrian bridge after being detained by the public. He was then arrested and brought to the Jalan Tun HS Lee police station where he was screened. Alcohol content was detected in the man’s breath.

The case is currently being investigated under Section 44(1) of the Road Transport Act 1987 which covers driving under the influence of liquor or drugs.