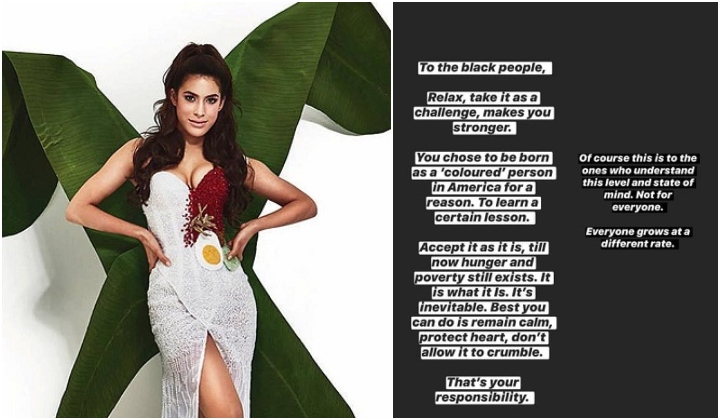 As the Black Lives Matter protests in the United States continues along with a global movement on the realities of oppression and racism against black people, a former Miss Universe Malaysia has sparked outrage over her tone-deaf comments on the matter.

Samantha Katie James, who was crowned Miss Universe Malaysia in 2017 and largely known for wearing the nasi lemak dress, took to Instagram to share her views on the redundancy of violent protests.

While that sentiment alone isn’t controversial, things took a strange twist when the Malaysian of Chinese and Brazilian heritage wrote a message to black people, advising them to “relax” and “take it as a challenge”.

She continued to say that they “chose to be born as a coloured person in America” and to “accept it as it is”.

Bewildered Malaysians who came across her message wrote back, some seeking clarification, some heated over her comments and some explaining the realities of systemic oppression of being a black person.

However, the ex-beauty queen’s responses include saying that she’s been insulted all her life for being a white girl in a local Malaysian school and that she refuses to generate anger.

Her baffling responses have since gathered steam online with the topics “Samantha” and “Miss Universe Malaysia” trending on Twitter.

Samantha is likely alluding to a Hindu karmic belief where a soul chooses its life and circumstances in order to learn the lesson for liberation. However, what she was trying to relay may have been lost in translation, lacking in context and perhaps an understanding on other people’s circumstances.

TRP has reached out to her for comment and still awaiting her reply at the time of writing.

While discussing the nuances of being black in America, along with its complexities is out of our depth, we’ll let South African comedian and political commentator in the US, Trevor Noah explain it in the emotional video below: