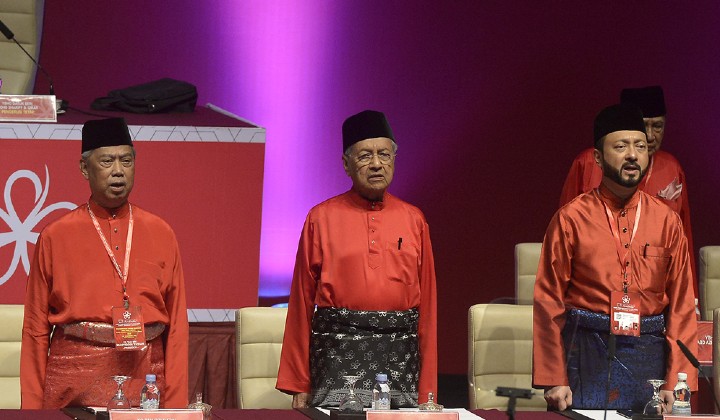 Parti Pribumi Bersatu Malaysia (Bersatu) already has a colourful history although the party has only been around since 2016.

Set up by UMNO defectors along with some new faces, the party was originally part of the coalition (Pakatan Harapan) that was bent on ending the 60-year Barisan Nasional rule.

After the collapse of Pakatan, Bersatu went on to form Perikatan Nasional – a new coalition that’s made up of UMNO, Bersatu and Pas.

We take a look at Bersatu’s beginnings to becoming what it is today.

Early beginnings of the party

Driven to bring down Barisan, the party was founded by Tun Dr Mahathir Mohamad who was at the time, Malaysia’s former and fourth Prime Minister along with other politicians in August 2016.

Bersatu teamed up with PH, a coalition comprised of Parti Keadilan Rakyat (PKR), Democratic Action Party (DAP) and a few parties from Sabah and Sarawak.

On their website, they’ve underlined what the party stands for:

During the 14th General Election, the coalition managed to do the impossible – topple the ruling government, BN and becoming the new party that was set to change the country for the better.

After GE14 in May 2018, Dr Mahathir became Malaysia’s seventh Prime Minister, making him the oldest statesman in the world to hold that position at the age of 92.

With his Cabinet made up of people from different backgrounds and ethnicities, it looked like there was actual progress. They even had a female Deputy Prime Minister in Datuk Seri Wan Azizah Wan Ismail.

Then it turned sour

After being in power, the coalition came across many challenges including the khat and black shoes debacle, the legislation to punish drunk drivers and that thing about succeeding the premiership to PKR President Datuk Seri Anwar Ibrahim.

There was a lot of bickering over the transition as some want Dr Mahathir to stay in power while others want Anwar to succeed him as soon as possible.

Except, it never happened.

The next day (24 Feb), Dr Mahathir resigned from his position as Prime Minister and tried to resign from Bersatu as well, but would instead stay on in the latter.

Dr Mahathir was reinstated as the interim Prime Minister on the same day that he resigned his post.

He then announced on 25 February that he wants to establish a non-partisan national administration.

The decision was made after interviewing the Members of Parliament.

Muhyiddin swore into office on 1 March 2020.

After the confusion in the Malaysia’s political landscape, which is around the same time when Covid-19 cases started to increase in the country, Perikatan Nasional It was made up of Bersatu, UMNO and Pas emerged as the ruling coalition.

Muhyiddin made his first address on 10 May.

Dr Mahathir then contested the legitimacy of Perikatan as he argued that they don’t have the majority to take control.

Perikatan brought along changes to the government including replacing chief ministers in certain states and also placing their own party members in Government-Linked Companies (GLCs).

During this time, Dr Mahathir was vocal about Bersatu, disagreeing with party although he was the party’s Chairman.

He was then ousted on 28 May along with several other party members, including his son, Datuk Mukhriz Mahathir.