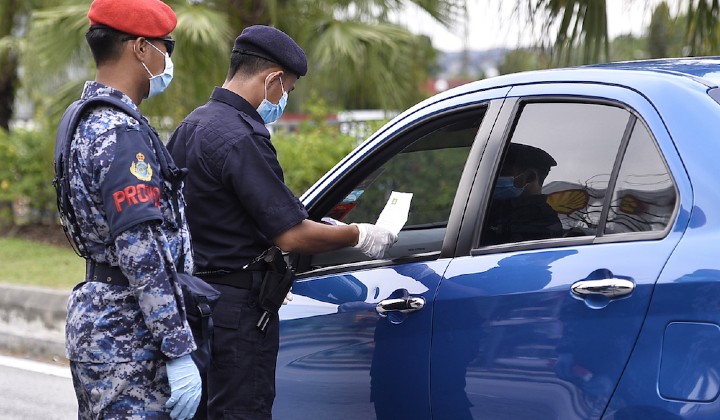 Four men successfully crossed three roadblocks between Selangor and Besut, Terengganu, on 21 May.

But then failed to keep up their ruse at the fourth roadblock on the East Coast Highway 2 (LPT2) near Perasing, Chukai when the Royal Malaysian Police (PDRM) figured out that their job offer letter was a fake.

Speaking to Berita Harian, Kemaman district chief police Superintendent Hanyan Ramlan said that the four had been travelling in a Proton Persona and claimed that they passed through three roadblocks in Kajang, Gombak, and Bentong using the job offer letter.

Aged between 20 and 37 years old, the four men were held by the police officers managing the Kemaman roadblock at 9.15am near Chukai, Kemaman and asked for their interstate travel application approval letter issued by PDRM.

The four admitted that they didn’t have such an approval letter and further questions by the police ended up in the car driver admitting that he had been hired to send the three other men to Besut, Terengganu and Kelantan.

The driver admitted that he had been paid RM350 to send the three men and that he had done so after being showed the same fake offer letter as their excuse for interstate travel.

Superintendent Hanyan continued saying that the police then checked the job offer letter and after making some verifications, found that the address of the company on the letter did not exist, adding that the three men then admitted that the letter was a fake one made by a friend of theirs.

The four were then not only issued compounds by the police but also ordered to turn their car back around and drive back to where they came from.