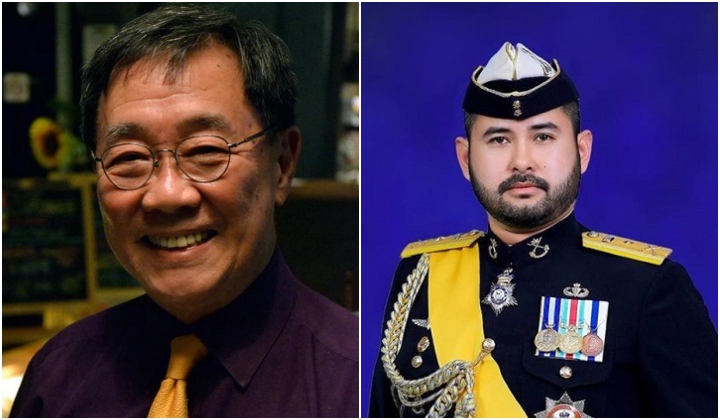 Patrick Teoh is largely known as the “Voice of Malaysia” due to his voice work on a large chunk of English advertisements aired over electronic media.

However, the former Radio DJ’s name is now uttered by Malaysians when discussing his recent arrest over the use of an expletive in a Facebook post in response to an old video of Johor crown prince Tunku Ismail Ibrahim, also known as TMJ.

Here’s a timeline of what happened:

In his response to the video, obscene language is used including a Hokkien curse word. The video allegedly shows the Johor prince handling firearms and training with personnel from the Johor Military Force (JMF).

According to Malay Mail, the offending post was deleted on the same day.

9 May, Saturday – The 73-year-old veteran radio announcer and actor is arrested in Petaling Jaya for allegations of insulting royalty.

He was brought to the Petaling Jaya Commercial Crime Investigation Department to have his statement recorded.

A police team from the Johor police Commercial Crime Investigations Department (CCID) took custody of Patrick at the Petaling Jaya police headquarters and brought him to his apartment in Damansara Perdana for a search and his laptop was confiscated.

South China Morning Post (SCMP) reports the police stated the investigation following complaints by two members of the public. The case is being investigated under Section 233 of the Communications and Multimedia Act for improper network use.

10 May, Sunday – Patrick was remanded for three days until May 12.

11 May, Monday –  Johor police chief Comm Datuk Ayob Khan Mydin Pitchay accused Patrick of being uncooperative. In a statement, he revealed that Patrick stated he lost his phone a day before he was called in for questioning and could not remember his email password.

12 May, Tuesday –  Johor Baru Magistrate’s Court grants a two-day extension on the remand order against the veteran radio DJ.

Ayob Khan told reporters that Patrick was showing some signs of cooperation and hoped with the additional remand, he will give his full cooperation.

Rajan told New Straits Times that the reasons given for the extension were that the police needed to record statements from other witnesses and to secure his handphone.

However, he argued that there was no evidence that Patrick will interfere with any witness as he is 73-years-old and has a medical condition. Rajan also explained that a suspect is entitled under the law to remain silent during the course of an investigation.

Patrick’s lawyer also said that he will either be released on 14th May or charged in court on that day, depending on the outcome of the investigations.

Suara Rakyat Malaysia (Suaram) questioned the need for Johor police to cross state lines for an offence that poses no immediate threat to public safety, especially during the Conditional Movement Control Order (CMCO).

It is bizarre for the Johor police contingent to cross its state borders to arrest an individual in Petaling Jaya when the offence itself could have been investigated remotely.

The human rights group also explained that for a criminal arrest, preliminary investigation should have been conducted by the police prior to any arrest.

The National Human Rights Society (HAKAM) has also stepped out to express grave concerns over Patrick’s arrest, calling for his immediate release.

Lim Wei Jiet, HAKAM Secretary-General explains that there is no basis to invoke the remand procedure primarily because Patrick Teoh had at all times cooperated with the police.

The human rights society also questioned the use of Section 233 of the Communications and Multimedia Act 1998, stating the section is unconstitutional due to the wording that can be easily abused by authorities to clamp down on any form of dissent.

Under Section 233, any person found guilty is liable to a maximum fine of RM50,000 or imprisonment up to one year, or both.