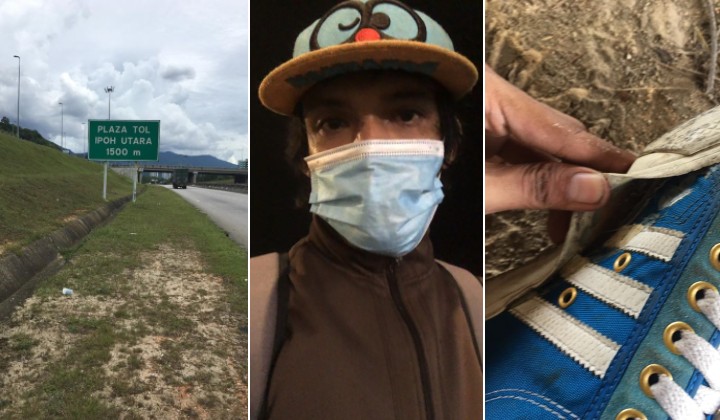 When the going gets tough, the tough get going.

After the nationwide Movement Control Order (MCO) had supposedly left him unemployed, broke, and homeless, one man decides to walk from Kuala Lumpur all the way home to Kelantan.

29-year-old Muhamad Noor Ramlee worked as a cook at the Universiti Teknologi Mara (UITM) campus in Shah Alam, Selangor, and had been staying in a rented home provided by his employer.

After finding himself thrown out of his lodging and having little to no funds to live by, Muhamad Noor had set his mind to return back east to Tanah Merah and be with his family.

At first, Muhamad Noor had tried to get a bus ticket from the Terminal Bersepadu Selatan (TBS) station but was told that all travel to the east coast had been prohibited by the authorities.

Left with no other options, the father of 3 children decides to get a ticket to Gopeng, Perak before starting his journey back to Kelantan on foot.

So begins Muhamad Noorâ€™s long journey to reach his home, walking day and night along the highway, while fasting in the month of Ramadan.

Throughout his journey, Matnoe had tried to stop passing vehicles in hopes to hitchhike home, but to no avail. His family in Kelantan had even tried to get approval from the police to travel interstate, in order to go pick Matnoe up on the road, but their request was also denied by the authorities.

After having made his way from Gopeng, to Gerik, Matnoe had apparently received some help from a local police officer who managed to get him a ride in the form of a lorry that was headed to Terengganu.

Later, Matnoe uploaded the final log from his travels, letting his followers know that he had safely reached his destination.

After having undertaken a Covid-19 screening test, just to be safe, Matnoe is now happily undergoing 14-days of quarantine at home with his family.