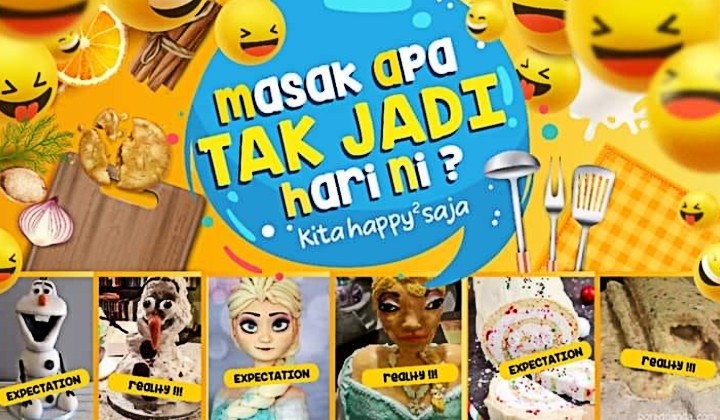 With the nationwide Movement Control Order (MCO) having Malaysians stuck indoors for more than a month now, not only are we deprived of our usual freedoms and entertainment, most of us are also missing out on all the delicious, delectable treats our country is famously known for.

While some Malaysianâ€™s might find themselves lucky enough to be blessed with the cooking skills to make any meal in order to satisfy their cravings during the lockdown, others are comically cursed with close to zero talent in the kitchen.

Thatâ€™s basically how the Masak Apa Tak Jadi Harini (What Did You Fail To Cook Today) Facebook page got its start as Malaysiaâ€™s current go-to for a peculiar brand of culinary entertainment.

The page, as the name would suggest, is a channel made especially for Malaysians to share their hilariously unsuccessful attempts at making recipes and cooking at home during the lockdown.

Users would share images of their failed endeavors in the kitchen, which included everything from burnt meals to deformed cakes and pastries, to be lovingly roasted and judged by a jury of their fellow Malaysians, and collectively humor themselves over the misfortunate cooking mishaps of others.

The page had become a viral sensation since it was created in early April, even to warrant a shoutout from the Prime Minister Tan Sri Muhyiddin Yassin during one of his live addresses on national TV.

But, drama is afoot among Malaysiaâ€™s at-home culinary critics, after one of the groupâ€™s members went to the cops after supposedly being cyberbullied on the page. Reportedly, one lady had issued a police report claiming that she was insulted by other users on the page.

As the story goes, the woman had posted a picture of her failed attempts at making steamed buns onto the group, which was apparently â€œattackedâ€ by some uncultured Malaysians, using profanity and other insults on the page.

In what appears to be a copy of the police report thatâ€™s surfaced online, the lady was apparently upset by the some of the unsightly comments made by some of the users on the page, even listing them out in the report itself.

Apparently the lady wanted a public apology from the rude Malaysians who had left such inappropriate comments on her posting.

Though itâ€™s unclear whether any action was taken over the police report, it appeared that the Facebook page administrators have since stepped forward to update its user policy and ask Malaysians to be nicer online.

If your curious to see more failed-dishes or interested in sharing and having your own cooking criticized, head on over to the Masak Apa Tak Jadi Harin Facebook page, HERE.