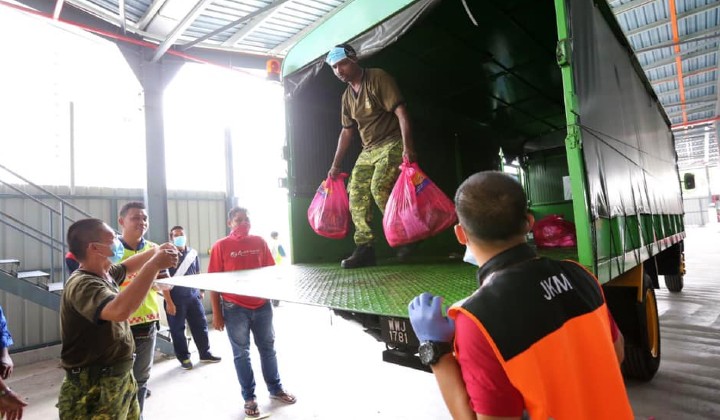 Reports have surfaced that a good number of Malaysians are going hungry this MCO despite promised food aid from the government.

Selayang is now under the Enhanced Movement Control Order (EMCO), which means that no one can enter or exit the premises, not even for groceries or food delivery. Instead, the residents will need to rely on food aid to be distributed to them.

According to FMT, some residents claim that they have only been provided with a 5kg bag of rice, a 2kg bottle of cooking oil, and an 850gm packet of wheat flour on Wednesday.

According to her, those three items were not sent by JKM. Instead, she suggests that it was delivered by an NGO.

However, JKM director-general Zulkifli Ismail told FMT that they have been working with DBKL (Kuala Lumpur City Hall) and NGOs to provide rice, cooking oil, and flour to Selayang residents, as well as some other items later on.

Some residents mentioned that because they have run out of food, they can only make porridge with the rice provided.

This isn’t the only time food aid distributed was under scrutiny for being mismanaged. According to Malay Mail, former human resources minister M. Kulasegaran criticized the lack of assistance given to his constituents in Ipoh Barat.

He claimed that none of the 1,500 families in the lower income group were given food aid which was promised by Rina’s ministry. Instead, it was NGOs that once again stepped in, but their financial resources could only support 200 families.

Kulasegaran notes that his own team has personally absorbed costs incurred so far in their attempt to provide food aid, but they still require the financial resources and manpower which can only come from the federal government and Rina’s ministry.

Later on, Kulasegaran, who is in DAP, was informed by JKM in the Kinta district that food aid was distributed, but only to Umno, PAS, and Bersatu divisions. The rest of the district did not receive any form of aid, which is a violation of JKM’s promise to send aid to everyone regardless of racial or political segregation.

According to Malay Mail, JKM staff allegedly told Balik Pulau MP Muhammad Bakhtiar Wan Chik from PKR that they recived “direction from the top” to follow instructions to distribute food aid to families that were not on the submitted list of families.

A letter from the Deputy Minister of Higher Education Datuk Dr Mansor Othman directs the JKM to only provide food aid to the coordinators mentioned in the attachment of the letter, which clashes with the government’s promise of equal food distribution and alluded to political favour.

According to Malaysiakini, 750 packets of food aid for the poor in Cheras have been sitting undistributed for two weeks, despite MP and DAP chairperson Tan Kok Wai having repeatedly requested for the aid to be given out.

He claims that he was denied his share and was not allowed to distribute the aid himself as he was not part of the ruling coalition. After two weeks, he is relieved that the food is still in good condition, but is frustrated that it has yet been undistributed.

The Malaysian Insight has also reported that other areas are facing questionable food aid supplies. Lembah Pantai MP Fahmi Fadzli claims that his constituency has received 250 food packs worth RM85 instead of the promised RM100.

He was told by JKM that the balance was deducted for packaging and transportation.

However, he also notes that it’s inefficient and improper to deduct the cost from the food aid itself. If RM15 was deducted from each packet of food aid, that totals up to a whopping RM3.3 million in just packaging and transportation costs alone.

Segambut MP and former Deputy Minister of the Women, Family, and Community Development Ministry Hannah Yeoh has shared a chart questioning where food aid distribution has gone, noting that almost all constituencies under opposition leaders did not receive any aid.

She has also strongly criticized Rina Harun, citing that responsibility of the issue lies with the minister-in-charge. According to Malaysiakini, Hannah Yeoh claims that political instructions from the top caused chaos for the staff in JKM who are overworked during this time.

In response, Minister Rina Harun has claimed that more than 260,000 food baskets and other forms of assistance have been channelled since the first phase of the MCO, according to Malaysiakini.

She told media that all food aid distribution were conducted via 108 Welfare Department offices throughout the country, and denied that there has been zero aid in Seremban, citing that she has personally handled the aid distribution there.

However, because both these food aid kits were not properly listed, there has been an incredible amount of confusion over which is which, prompting MPs to demand the minister-in-charge Rina Harun to be transparent about what’s inside the food aid packets as well as the disparity of distribution.