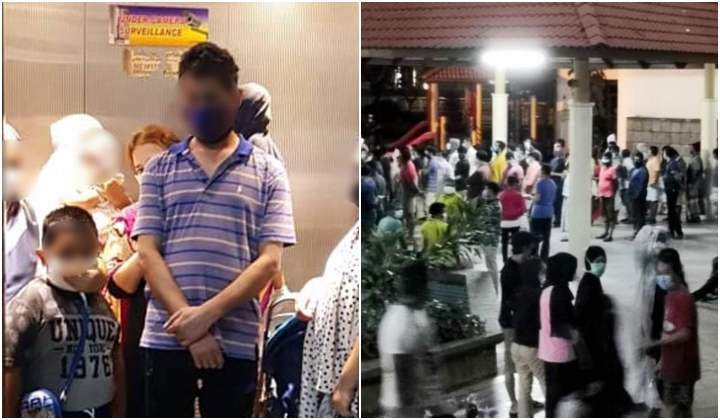 The residents and management committee of Menara City One has insisted that the crowds formed during Covid-19 tests at the building on 24 April happened because the authorities demanded them to all come down at the same time.

This was in response to Health director-general Datuk Dr Noor Hisham Abdullah who said that the residents of Block B came down without being called.

We denied there was massive number of block B residents who came for 24 April 2020 intended screening for Block A, as mentioned by DG of Health, Datuk Dr Noor Hisham Abdullah in his press conference today.

Menara City One residents and Management Committee via Malay Mail

During his daily Covid-19 briefing on 25 April, Dr Noor Hisham said that the overcrowding that happened at the condominium was a concern as it meant that social distancing rules were not adhered to.

It is a concern to the Ministry, because when we checked and looked into the report, the announcement was made only for Block A.

According to Dr Noor Hisham, residents of both Block A and Block B came down for screening despite the Ministry only calling residents of Block A.

Previously, Malaysiakini reported that the residents of Menara City One complained about the way the Covid-19 tests were being conducted at the condominium.

The residents are afraid that the latest rounds of tests done could lead to a fresh wave of Covid-19 infections in the building. They said that the testing procedure was completely disorganised and left little to no social distancing, especially in the lifts.

In photographs and a video of the incident which was shared online, the residents were seen wearing face masks but standing almost shoulder to shoulder in the lift and in the long queue.

A similar incident had occurred there during the previous round of testing on 8 April as well.

Residents were asked to come down altogether in large numbers at once.

After that incident, Eliza explained that the testing team from the Health Ministry agreed to stagger the testing procedure to one floor at a time. Though, she noted that it is possible the testing team was pressed for time on 24 April.

Menara City One has been placed under an enhanced movement control order (EMCO) for almost one month. This was done on 30 March after the condominium recorded 17 positive Covid-19 cases.

Since then, there has been a total of 51 positive cases recorded there. However, there have been no new cases since 21 April.

Eliza shared that after the last 10 positive cases were identified on 21 April, another 40 individuals were identified as their close contacts and taken out from the building for quarantine.

This meant that the risk for the remaining residents had been reduced.

However, the residents were disappointed that the ministry still decided to conduct tests in such a poorly managed manner.