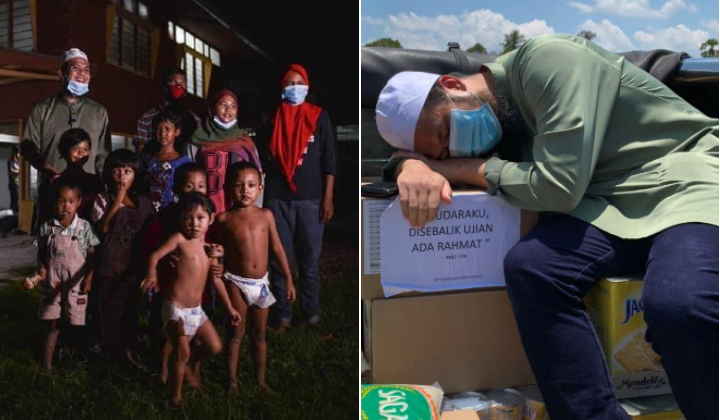 In his recent move to help the needy, Ustaz Ebit managed to coax an impoverished family to move out of their rundown shack and into a new home, fully paid for by his movement.

Based on a series of intimate writings, images and videos shared on the Ustazâ€™s official Facebook page, the family which was made up of 2 grandparents and what looks to be their 10 grandchildren, had been living in extremely horrid conditions for some time as they could not afford to look for better accommodations.

Depressingly, the family was surviving mainly on government aid and donations from the public, none of the children were going to school, and the patriarch of the family (the grandfather) had been bedridden after suffering a stroke.

Ustaz Ebit managed to get the family moved into a bigger, better home, the grandfather checked at the hospital and promised to help the kids with their education and future.

Reportedly, the Kedah Zakat Board (LZNK) had tried and failed to get the family to move for the past 12 years.

Apparently the family had been offered a flat to stay in but turned down the offer because of the size of the family and the location of the offered home.

Jihad at a cost?

Known for his point-blank humanitarian works, Ustaz Ebit is the subject of admiration across the racial and religious divide with his efforts in assisting the poor, homeless and the disenfranchised members of Malaysian society.

However, there are those who apparently misinterpreted and feel uncomfortable with the effort that he and his team have put into addressing other peopleâ€™s struggles.

Reportedly, the Ustaz was getting flack for not abiding by social distancing practices while he is out on charity work during the nationwide lockdown.

Ustaz Ebit addresses this concern by sincerely apologizing for his mistakes and to everyone who is hurt by his efforts to help the needy.

The Ustaz also hopes for the publicâ€™s blessings for him to continue to help more people in the future.

Learn to look, listen and live with love. Letâ€™s not point blame, because each of us is responsible for ourselves and the community, in the eyes of God.

Currently, the government requires all non-governmental organizations (NGOs) and humanitarian movements to be registered with the nationâ€™s Welfare Department and adhere to strict guidelines to be allowed to operate during the MCO.

To know more about Ustaz Ebit’s endeavors, you can head on over to his official Facebook page, HERE.