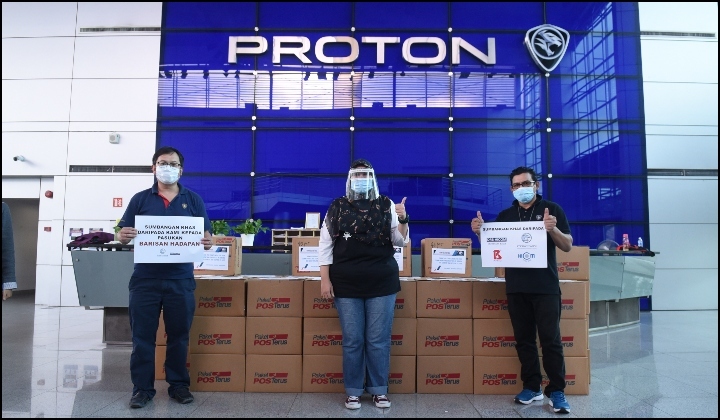 Last week, Proton announced that they were going to start producing face shields for the frontliners battling the Covid-19 pandemic.

This came after new that Malaysia was facing a shortage of face masks and other personal protective equipment (PPE) due to the sheer volume of PPE required during the outbreak.

Now, Proton has revealed that the company has started producing the face shields. In fact, the first batch of 8,000 units was shipped out on 16 April to hospitals in Kelantan and other East coast states.

The face shields were produced at the companyâ€™s Shah Alam plant, which has been quiet since 18 March when the movement control order (MCO) came into effect. But now, the plant is seeing a flurry of activity as staff members work hard to make the face shields.

In their statement, Proton explained that the process of producing the masks began with designing and testing prototypes as well as getting feedback from end-users to confirm the final product met their needs.

While that was going on, the project team also had to plan for a production line that met with Covid-19 health protocols but was still as efficient as possible.

PROTON is humbled by the response received both internally and outside of the company to our face shield project. The number of staff volunteering their services was overwhelming, despite inherent risks involved in leaving home and coming to work.

According to Proton, many of their staff that volunteered to be part of this project from whom they picked 50 people. These employees worked on an assembly line to measure and cut the various components of the face shields before assembling all the parts into the final product.

The company took extra steps to ensure everyone was kept safe from possible infection by providing employees with PPE and establishing sufficient space between each workstation to maintain social distancing practices.

Proton shared that this assembly line is capable of making up to 3,000 units a day, and the company is expected to take roughly 20 days to produce the 60,000 units they committed to deliver.

Thankfully, they arenâ€™t doing this alone. In fact, the project is a joint effort with Protonâ€™s partners, such as Pos Logistics Sdn Bhd who contributed more than 2,000 large carton boxes to pack the face shields and ease transportation.

Besides that, HICOM-Teck See Manufacturing Malaysia Sdn Bhd contributed 1,500 kg of polypropylene, one of the main components in a car bumper, to be used to produce the frame of the face shield.

Meanwhile, the original design for the face shield was contributed by Universiti Teknologi MARA (UiTM)