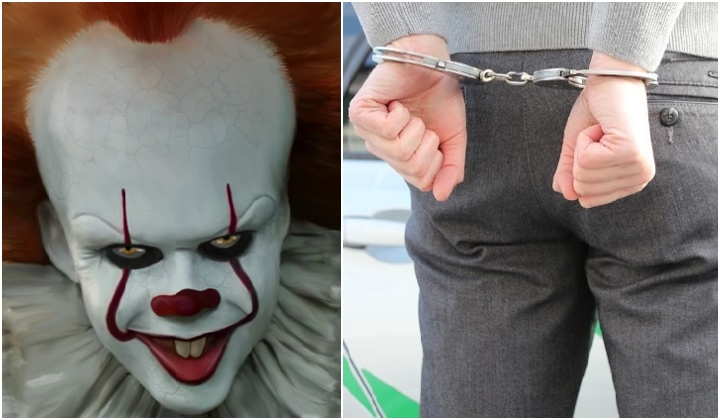 Sarawakians out running errands in Kuching today had the shock of their lives when a dark blue car sped past followed by the wailing sirens of a police car.

They had inadvertently found themselves witnessing one of the best police car chases of 2020, one that involved drugs, a toy gun and Pennywise.

Sometime after noon on the 3rd of April, a police patrol car noticed a vehicle exhibiting strange behaviour somewhere along Jalan Central Timur.

Suspicious that something was amiss, the officer tried to flag down the vehicle to conduct a check.

Unbeknownst to the policeman, inside the car were three men nervously looking over their bounty of what appeared to be methamphetamine – and oddly enough, a toy gun and a clown mask modeled after â€˜Pennywise the Clownâ€™ from a move based on the Stephen King novel â€˜Itâ€™.

Knowing that getting caught is not an option, they put the pedal to the metal and sped away. Jumping swiftly into action, the policeman gave chase while calling for backup.

The desperate men, who had past criminal records for drugs and other offences, turned corners at breakneck speed, zooming through town and flying across the Sarawak River with the policeman hot on their heels.

Some 10 kilometres into the chase, the suspects nearly collided with a back-up police vehicle at Jalan Tun Abdul Rahman Yaakub. But they had just enough desperation to pull through for another 5 kilometres before the police succeeded in blocking their vehicle somewhere along Jalan Depo.

Jumping out of the car, the three men started running away. One tried to get rid of the evidence by throwing away the bag with their drugs inside. But they didn’t get too far, and the police finally managed to apprehend them at 1.10pm. Thus, ending the police chase.

Kuching district police chief ACP Awang Din Awang Gani confirmed the arrest with The Borneo Post, revealing that the suspects were 25, 27 and 33-years-old.

The three men are being investigated under the Prevention and Control of Infectious Diseases (Measures within the local Infected Areas) Regulations 2020 and the Dangerous Drugs Act 1952.

Remember, donâ€™t go clowning around with crime because no police officer is afraid of you, not even if youâ€™re Pennywise!

Watch the video of the arrest below: