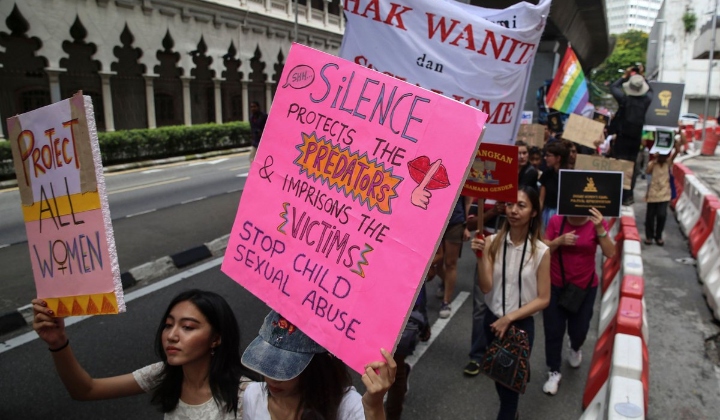 As the government implemented the movement control order, there was a drop in distress calls to women’s rights NGOs for awhile. But an increase is clearly evident now.

Speaking to Malay Mail, the Women’s Aid Organisation’s (WAO) advocacy officer, Tan Heang-Lee shared that their statistics show a 14% increase in hotline calls and WhatsApp enquiries on domestic violence since the beginning of the MCO.

As domestic violence is often about having and maintaining power and control, the current uncertain global economic and health conditions due to Covid-19 and the MCO can further aggravate an abuser’s desire to exert their dominance.

This leads to NGOs being concerned about an increased risk of violence as many victims will be unable to seek help or even escape their abusers during the current health crisis.

Domestic violence survivors are also at greater risk because they are now trapped in the house all day with the abuser. It is also more dangerous for them to seek help, as the abuser may be monitoring their every move.

Besides the obvious mental, emotional and health effects of the MCO, Tan explains that the MCO is also dangerously affecting the financial stability of survivors and victims.

Some of those who are completely unable to work during the MCO may have had no other choice but to become more financially dependent on their abuser in order to survive.

Meanwhile, domestic violence survivors who have left their abusers face an uphill battle as they try to get back on their feet and become financially independent during normal times. Imagine the kind of challenges they face during a pandemic when finances are difficult for everyone.

Among 20 former residents of WAO’s domestic violence shelter, 30% are unable to work due to the MCO, 25% are still looking for a job, while another 5% had their salaries reduced.

The All Women’s Action Society (AWAM) reported that on top of distress calls and enquiries, other types of appeals received included victims who just wanted to just talk about their feelings of helplessness and frustration during the MCO.Â

AWAM’s programme and operations manager Nisha Sabanayagam shared that these types of calls were to be expected during the MCO and that their counsellors were ready to help.

People who reach out to us sometimes do not want to talk over the phone, but just want to text message. That is perfectly acceptable.

The NGOs urge survivors and victims to continue to reach out to the numerous channels for help if they need it. Nisha explained that NGOs tend to be aware of each other. So, if one organisation is unable to support a case for whatever reason, they will refer the case to another NGO who will be able to help the victim.

Tan stressed that during this health crisis we’re facing, it’s “essential” for the community to help and protect the vulnerable.

With the extension of the MCO, they urge everyone to be vigilant and to help contact them or the police if you suspect someone you know, such as a neighbour, a friend, or a family member is in danger.

If you hear your neighbours fighting and suspect that someine is being abused, just ring their door bell. This sends the signal that people are watching. You should make sure you’re safe before approaching the situation, and you can also get someone to go with you.

If you or someone you know needs help, reach out to any of the organisations below. They are ready to help you.

Women’s Aid Organisation (WAO) has extended their hotline to 24 hours and provide advice and support virtually through the phone and WhatsApp. A legal officer will be on standby to assist as well.
Website: wao.org.my
Hotline: 03-7956 3488
Or WhatsApp TINA: 018-988 8058

Sisters in Islam (SIS) has also extended their hotline from 8am to 10pm, Monday to Friday until April 14, 2020. Their legal officers are on standby to answer any enquiries.
Call or WhatsApp: 011-2370 1006
Email: telenisa.sis@gmail.com
Twitter (SIS and Telenisa)
Facebook (SIS and Telenisa)