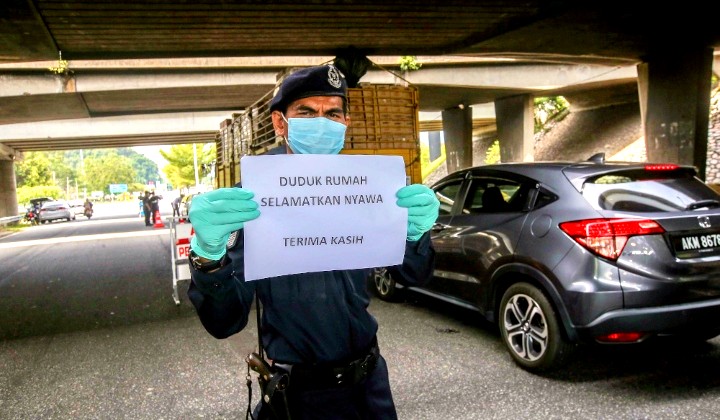 A George Town Police officer is now forced to self-quarantine after he put his life on the line preventing a Patient Under Investigation (PUI) suspect from fleeing a roadblock.

During the 6.30pm incident on Friday, the police were enforcing the Movement Control Order with a routine roadblock at the Bayan Baru roundabout.

At the roadblock, they hailed down a car carrying four people aged between 27 and 56.

They then proceeded to question the 55-year old-driver who eventually confessed that he had attended the tabligh event at the Sri Petaling Mosque.

The police then urged the man, and the three other passengers, including his wife, to go and get screened. The man refused and tried to speed away before an officer quickly stopped him by pinning him against his seat.

The southwest district police chief, Supt A. Anbalagan then took over and escorted the PUI and the passengers to the Bayan Baru public clinic for testing and then handed them over to health authorities.

The PUI is from Batu Maung, Penang.

Anbalagan praised his police officer for his heroic act and swift action but stressed that due to his close contact with a PUI, the cop must now self-quarantine for 14 days as a precaution.

The police chief urges all PUI suspects to please cooperate with authorities by volunteering to be screened and self-isolate for the safety of the public.