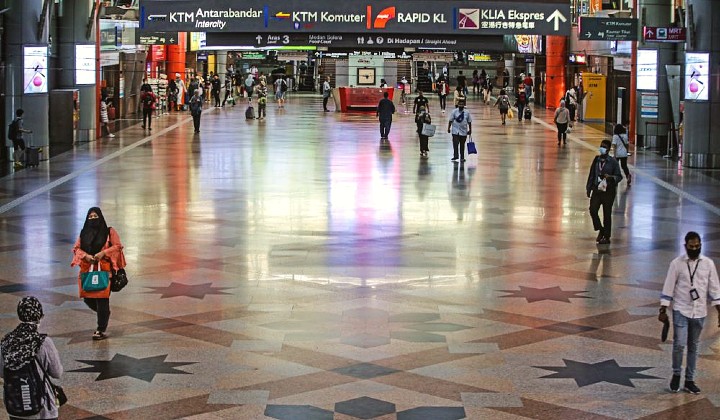 According to the Health Ministry (MOH), 80 of the new patients were linked to the tabligh congregation cluster, which saw a gathering of nearly 20,000 people.

In total, 513 people have been known to have contracted the virus at the religious event, including patient #178 who recently passed away from a fatal coronavirus infection.

The 34-year-old Malaysian man, one of the first two casualties in Malaysia, was safely laid to rest at a Muslim cemetery in Johor Baru on the night of March 17.

Simultaneously, MOH also reported that another 11 patients undergoing treatment in the country had successfully recovered and been discharged from the hospital. Overall, Malaysia has registered 60 cases of recovery from Covid-19.

Meanwhile, the Movement Control Order, effective from March 18 to 31 2020, showed some parts of the country, normally bustling with crowds and noisy traffic, turning eerily quiet.

Reportedly, city streets, popular shopping malls, tourist centers and even the capitalâ€™s busy public transportation hub, KL Sentral, along with other various locations in the country are void of people as Malaysians opt to stay indoors following the two-week restriction period.

However, it appears that some Malaysians are still finding it difficult to abide by the control order as a number of restaurants are still serving patrons who chose to dine in, instead of tapauing their food as instructed by the authorities.

But despite the reluctance of some Malaysians, the first day of the Movement Control Order sees the publicâ€™s previous panic-buying frenzy coming to an end.

Conditions around grocery stores, wet markets, and supermarkets nationwide look as though they have returned to normal with people no longer frantically rushing to stock up on supplies.

Globally, the world is slowly coming to grasp with the unsettling realities of living in a Covid-19 pandemic.

Increasingly, more and more nations are moving to close their borders and place restrictions on their citizens to contain the spread of the viral outbreak.

Even the entire European Union had agreed to close down the bloc’s borders for a whole month, forcing some 455 million of its citizens to live under restrictions.

Across the globe, travelers are scrambling to find routes to their respective home countries as airports closed down and routine flights are being suspended leaving many, including a number of Malaysians, stranded with nowhere to go.

Though some of the restrictive measures being taken by Malaysia and other nations may seem harsh and interruptive, the World Health Organisation (WHO) says that more â€œaggressiveâ€ actions were needed in order to contain and combat the spread of Covid-19, especially in Southeast Asia.

With cases increasing day by day, Malaysia remains the worst-affected country by the coronavirus outbreak within the SEA region and according to the Health director-general Datuk Dr Noor Hisham Abdullah, the country could be faced with a â€œtsunamiâ€ of infections if Malaysians fail to adhere to the Movement Control Order, stay indoors and limit social activities.

As of writing, Covid-19 has infected more than 200,000 individuals and taken the lives of some 8,000 people all over the world.

So remember to play your part in the fight against coronavirus by implementing the correct hygiene practices, limiting social interactions and staying indoors, and be sure to keep yourself updated with the latest happenings from around the world, here at TRP.