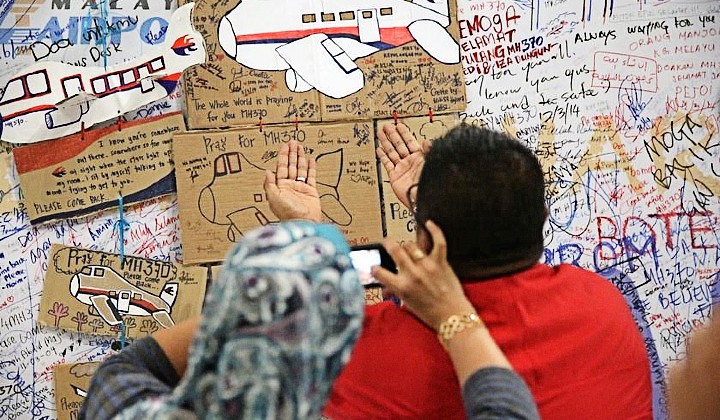 March 8th marks the anniversary of the disappearance of Malaysia Airlines (MAB) flight MH370, etching a dark and grim chapter in Malaysia’s history.

The Boeing 777-200ER airliner was on a routine flight departing from the Kuala Lumpur International Airport (KLIA), en route to Beijing, China when the aircraft along with its 239 passengers and crew vanished without a trace somewhere over the Indian Ocean in 2014.

Though several extensive search operations were made to locate the missing aeroplane, the unsolved disappearance of flight MH370 stands as one of the most compelling mysteries and remains a profound tragedy that continues to bewilder aviation experts, friends and family members, as well as the public at large till this day.

On the fateful night of the flight’s disappearance, MH370 commanded by senior pilot Captain Zaharie Ahmad Shah and first officer Fariq Abdul Hamid took off from KLIA at around 40 minutes past midnight and was due to arrive in Beijing some 6 hours later.

In less than an hour into the flight, MH370 set its last voice communication to Malaysian air-traffic controllers as it passed into Vietnamese airspace.

The last recorded radio transmission from the cockpit of MH370.

Moments after the plane crossed into Vietnamese territories, MH370 went dark and disappeared from radar.

A few hours passed before air traffic controllers were made aware of the disappearance of MH370 and a “code red” was issued declaring an immediate emergency response to locate the missing jetliner.

Later at dawn, an official announcement was made on MAB’s official Facebook page confirming that MH370 had gone missing. Panic and confusion soon followed as the world gathered in shock and awaits news of the mysterious tragedy.

A large multinational search was launched to locate the missing aircraft which soon became the most expensive search effort amassed in aviation history.

But due to the nature of the incident, investigators had trouble pinpointing the presumed location of the missing plane.

Reportedly, the aircraft had been missing some 10 hours before the first search planes began scouring the skies and seas for MH370 as it was believed that the plane had ultimately run out of fuel and crashed somewhere into the huge expanse of ocean.

It was not unheard of for a lost plane to remain unfound. When Air France flight 447 along with its 228 passengers and crew crashed into the Atlantic Ocean in 2009, it took investigators 2 years to discover its wreckage at the bottom of the sea.

Radar and satellite data revealed that MH370 had changed its scheduled course, and had flown back over Malaysia before making a turn towards the southern Indian Ocean.

This immense area soon became the focal point of the search for the missing plane.

Search teams scanned the surface and depths of the ocean for any traces of the missing flight but came out empty.

Throughout the years of searching for the missing airplane, some 20 pieces of aircraft debris believed to be from MH370 were recovered in various locations around the world; including 3 pieces of wing fragments that washed up ashore on the eastern coast of South Africa in Reunion Island, Madagascar, and Tanzania.

However, efforts to locate the entire wreckage of the aircraft have proven nothing but futile.

In 2015, more than a year into the disappearance of the plane, Malaysian authorities officially declared the incident as an “accident” and announced that all passengers and crew aboard MH370 were presumed to be dead.

After 3 years of extensive investigations, the search for MH370 which covered over 120,000 sq km came to an end in 2017 without any success.

Then in 2018, the Malaysian government launched another search attempt to locate MH370 with a U.S private exploration firm, Ocean Infinity.

The search team covered 112,000 sq km of the southern Indian Ocean for some five months before the mission was called off after 90 days without making any credible discoveries.

There have been countless theories to the mysterious vanishing of MH370 ranging from the plane’s mechanical failure to possible hijacking to even a murder-suicide plot orchestrated by the pilot.

However, MH370’s final investigation report released in 2018 found no conclusive evidence or answers to the disaster, leaving the world with more questions about what happened to the aircraft and its passengers.

The ones who were left behind

The mass panic and attention that MH370’s disappearance garnered was something that the country had never experienced, with some describing the chaos that ensued to a “circus“.

For weeks, news reporters from around the world gathered at KLIA to catch the latest scoop to the sensational story, with the tragedy even attracting the attention of a number of “holy men” who brought promises that the plane would eventually be found.

Over the years, countless thoughts and prayers have flown in from all corners of the globe in memory of the missing flight and its passengers. Soon the hashtag “#PrayForMH370” along with other variations became the go-to for the world to send their love to the victims and their families.

And every year, memorials are “sometimes” held across the planet in remembrance and honor of the 239 lost souls on board the missing plane.

To this day, many of the victim’s families and loved ones remain disappointed over the initial handling of the aviation disaster as well as bewildered and unsatisfied over the outcome of MH370’s multiple investigations.

However, there’s still continued pressure for the Malaysian government and international authorities to resume efforts on locating the missing aircraft in hopes that one day it would be found and bring closure to one of the world’s biggest mysteries.

Why I Will Never Fly MAS Again [Opinion]