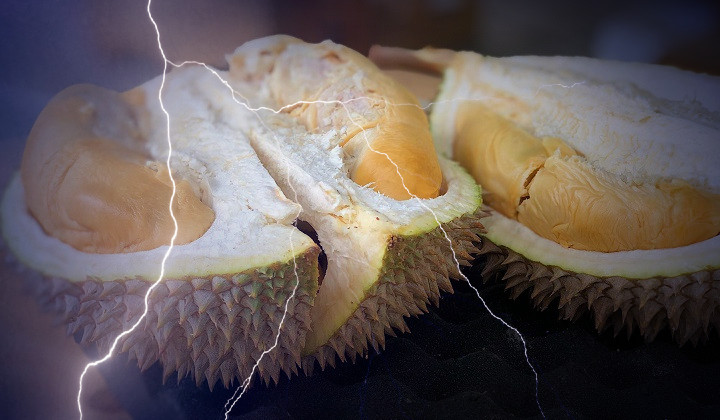 The love for durian can be described as a powerful feeling, a feeling that’s almost electric. Literally.

It seems that the King of Fruits has a new crown – a lightning-fast electric charger.

A new study published in the Journal of Energy Storage found that durians, along with jackfruits, had the characteristics for rapid electric charging.

The researchers from the University of Sydney worked on developing a new method of extracting durian and jackfruit biowaste until they finally figured out how to turn the fruits into supercapacitors.

Supercapacitors, sometimes known as ultracapacitors, can store and release large amounts of electricity very quickly. Instead of using chemicals (like batteries), capacitors use static electricity to store electricity.

This means that a supercapacitor can charge a phone in seconds, while it takes mere minutes to power an electric car.

While they work faster and are safer than batteries, adoption of supercapacitors is slow due to size issues – it’s much bigger than a battery that holds the same amount of energy- and the high-cost.

Durian to the rescue

To develop a good electrode for a supercapacitor from organic waste, a light and fibrous substance with high moisture content is needed. The fruit cores of durian (Durio zibethinus) and jackfruit (Artocarpus heterophyllus) were selected due to their structures and their prospect of intrinsic nitrogen doping.

The spongy guts of the fruits were harvested and turned into carbon aerogels that were then used as electrodes.

As a result of their testing, the researchers found that the both the fruit-based aerogels displayed excellent long-term cycling stability and rapid charge. However, the durian carbon aerogel displayed significantly greater power density, meaning it’s superior in maintaining full battery cycles.

The added silver lining of this discovery is the potentially significant environmental impact. The process of creating and discarding a traditional battery isn’t exactly nature’s best friend due to their toxic contents and reactive properties.

By adopting food wastes into “value-added products” (such as a supercapacitor), there is a dual advantage of improving the overall economy AND reducing environmental pollution.

So, while the idea of a durian charger sounds crazy, it just might be crazy enough to work.