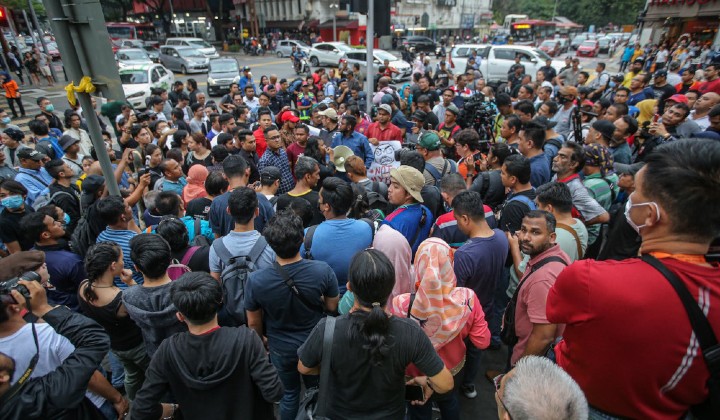 He was sworn into office on 1st March, but that did not sit well with certain sections of the rakyat who then took to the streets to protest the appointment.

Two rallies took place over leap year weekend in Kuala Lumpur. People gathered in Dataran Merdeka on the night of 29th February and again in front of Sogo shopping centre the next day to voice their dissatisfaction on the same day that Muhyiddin was at Istana Negara.

The day after, the police launched an investigation on the organisers of the illegal assembly in the heart of the capital after issuing warnings the day before.

The organisers allegedly didn’t notify the authorities days before the rally which violated the Peaceful Assembly Act which has prompted the police to act.

The assembly lasted for about 2 hours and started at 6 pm and was organised by Save Malaysia Demonstration Committee.

But what is the Peaceful Assembly Act?

Can you join or organise a rally?

The Federal Constitution has stated in Article 10 that Malaysian citizens have the right to the freedom of speech and they are allowed to assemble peacefully and without arms.

The details are underlined in the Peaceful Assembly Act (PAA) – a law that underlines the regulations for Malaysian’s to hold assemblies.

The law states that “assembly” means an intentional and temporary assembly of a number of persons in a public place.

Under the act, those who want to organise assemblies should ensure that participants don’t break any laws, act or make statements that promote feelings of ill-will or hostility amongst the public at large, among others.

Originally, organisers were required to inform authorities 10 days in advance before the rally, with a RM10,000 fine for those failing to do so, but it was amended in 2019.

Technically, not all assemblies need to be notified such as religious assemblies, funeral processions, wedding receptions, open houses during festivities, family gatherings, family days held by employers, general meetings of societies or associations.

The act was amended in 2019 by the Parliament where one of the main changes is the decriminalisation of street protests.

Besides that, the time for organisers to notify authorities has been shortened from 10 days to 5 which the non-government organisation (NGO) Human Rights Watch said is still behind the international standard of 48 hours.

The Human Rights Commission of Malaysia (SUHAKAM) lauded the amendment made by lawmakers but commented the law can be further improved such as further reducing the time to notify the police and allowing children to participate in assemblies.

However, the human rights body accepts in principle the requirement is to enable the authorities to facilitate the assembly, protect public safety, prevent any possible disorder or crime and to reroute traffic if necessary.

They’ve also cited the UN Human Rights Committee which states that â€œa requirement to notify the police of an intended demonstration in a public place 6 hours before its commencement may be compatible with the permitted limitations laid down in Article 21 of the International Covenant on Civil and Political Rights (ICCPR).â€

Just like everything else, protests have their pros and cons.

According to the Washington Post, it’s possible for rallies to work, but organisation, messaging and non-violence are underlined as key factors to ensure the protest works. They’ve cited a study that found nonviolent campaigns are successful about 53% of the time as compared with 26% for violent efforts.

Another study found that spikes in both liberal and conservative protest activity can increase or decrease a candidateâ€™s vote by enough to change the final outcome.

While it’s noted that the internet has helped in raising awareness and build movements quickly, some have pointed out the technology does have its weaknesses.

Before social media, rallies require more effort to organise but it helps to build the infrastructure for decision making and strategies for sustaining momentum.

So it’s possible for Malaysians to protest or even organise rallies but we need to first know our rights and procedures before doing so.