The man who prefers to go by Muhyiddin Yassin is expected to resign after 17 months into his premiership. 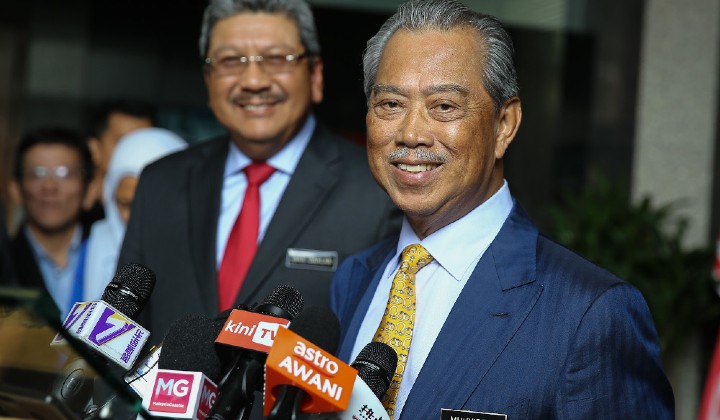 He became Malaysia’s eighth Prime Minister at the very start of a pandemic but a year and a half into his premiership, Tan Sri Mahiaddin Md Yasin’s position became untenable.

Talk of his possible resignation became more than rumors after he lost support from UMNO with its party president Datuk Seri Ahmad Zahid Hamidi declaring that they no longer support the government.

Mahiaddin claims that the reason for UMNO’s withdrawal is because he won’t help with their court cases.

However, UMNO says it’s because the Prime Minister went against the Agong and mishandled the pandemic as Malaysia has recorded over a million cases and 10,000 deaths, with upwards of 20,000 new cases per day.

But where did Mahiaddin come from and how did he become the Prime Minister of Malaysia in the first place?

Tan Sri Muhyiddin Yassin, as he apparently prefers to go by, was born on May 15, 1947, in Muar and received his early education at Sekolah Kebangsaan Bandar Maharani, Muar before attending Muar High School.

He then furthered his studies in Universiti Malaya from 1968 until 1970 where he received his degree in Economics and Malay Studies.

Among them is the local singer, Najwa Mahiaddin.

Mahiaddin started in politics in 1971 when he joined UMNO Pagoh as a member for five years before he was elected as Pagoh Umno Youth Chief and Division Secretary in 1976.

At the age of 31, he won Pagoh’s parliamentary seat during the General Elections in 1978 and became the Parliamentary Secretary of the Ministry of Foreign Affairs three years after that.

In 1982, Mahiaddin continued his rise both in government and UMNO as he was chosen to become the Deputy Federal Territories Minister, Johor Umno Youth chief, and joining Umno’s Youth Exco all in the same year.

A year later, he jumped to another Ministry, this time becoming the Deputy Minister of Trade and Industry in 1983.

In 1984, he was chosen as Pagoh’s UMNO Chief, defeating former Johor Chief Minister, Tan Sri Osman Saat but failed to become part of the high council due to lack of votes.

He was also the chair of UMNO Johor’s liaison body at the time.

In 1990, he defended his DUN seat and entered his second term as Johor’s Chief Minister but wasn’t so lucky in the party elections as he lost out to Anwar Ibrahim for the Vice President post in the same year.

He contested in the ninth General Election in 1995 and defended his Pagoh parliament seat but didn’t extend his term as Johor’s Chief Minister.

Close, but no cigar

In 1995, Mahiaddin was appointed into Tun Dr. Mahathir Mohamad’s Cabinet as Youth and Sports Minister but he failed to defend his position in UMNO a year later in 1996.

He won the Pagoh parliamentary seat in 1999 and became Minister of Domestic Trade and Consumer Affairs soon after.

During the UMNO elections in 2000, he regained the Vice President post, holding the position for 8 years.

4 years later in 2004, he retained his parliamentary seat again in Pagohd before being elected as the Minister of Agriculture during Tun Abdullah Ahmad Badawi’s administration.

In 2008 when BN was starting to lose votes to Pakatan Harapan, Mahiaddin comfortably defended his seat and subsequently became the Minister of International Trade and Industry.

The year after he had become Deputy Prime Minister and also Minister of Education under Datuk Seri Najib Razak’s government when the latter became Malaysia’s sixth Prime Minister.

In October of the same year (2009), he contested against Tan Sri Muhammad Muhammad Taib to take the UMNO Deputy President post.

A year later, he was involved with a controversy revolving around his statement of being “Malay first” as a response to DAP leader Lim Kit Siang who challenged him to state whether he is a Malay or a Malaysian first.

He added soon after that despite being “Malay” first, he is still a Malaysian and also said that he would be shunned by all the Malays if he were to say that he is a Malaysian first and a Malay second.

He continued to carry on the post until 2015 when he was relinquished of the Deputy Prime Minister position after questioning Najib’s involvement in the 1Malaysia Development Berhad (1MDB) and RM2.6 billion donation issues.

He openly criticised Najib’s government a day before UMNO’s General Assembly but was not allowed to give his speech during the convention.

Mahiaddin was later suspended as UMNO Deputy President until the coming election and his role was taken over by Zahid.

He was kicked out of UMNO in 2016, alongside Dr Mahathir’s son, Datuk Mukhriz Mahathir, and Datuk Shafie Apdal.

After UMNO, he began to attend PAS events where he would give speeches alongside the party’s top brass.

UMNO politicians have downplayed his involvement with PAS by labeling him “desperate” to bring down the previous government.

He then joined forces with Dr. Mahathir, who also left UMNO around the same time to form Parti Pribumi Bersatu Malaysia (Bersatu), a party that offers full memberships to bumiputeras, while non-bumiputeras can be associate members.

Bersatu was part of the Pakatan Harapan Plus (PH+) coalition that brought down Barisan Nasional in March 2018, after more than 60 years in power, and Mahiaddin was appointed Home Minister under Dr. Mahathir’s new government.

Later, in 2018, he spent a month being treated for pancreatic cancer at the Mount Elizabeth Hospital in Singapore and had a tumour removed before returning to Malaysia.

The Sheraton Move: A coalition between Bersatu, UMNO, and PAS

This resulted in Dr Mahathir resigning as Prime Minister and when PH could not agree on whether to re-elect him or move on to Anwar, the Agong called all the MPs to see him one at a time.

After listening to them, the Agong decreed that Mahiaddin had the most votes and on 29 February 2020, he was sworn into office.